Browse: Home » Blog » A Tribute to My Dad, Jon Thomas

A Tribute to My Dad, Jon Thomas

Who was Jon Thomas?  Well, quite literally, he was a Clown.  A funeral is a great place to learn some interesting facts about your friends and loved ones.  At my father’s funeral, there were vignettes of his life displayed throughout the funeral home.  Most folks knew him as a funeral director, Rotarian or philanthropist. Sadly, our Gainesville friends did not get to meet M.T. NOGIN. 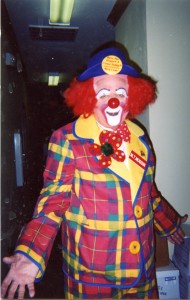 Of all the pictures of his childhood, career, and life adventures, the pictures of M.T. and Bubbles certainly got the most questions. About 15 years ago, my mother and father decided to go back to school to become certified clowns through FSU’s Flying High Circus. Interesting, different, and most certainly unique. That was my dad, always creative, always outside the box, and always having a good time.

Growing up in the small town of Union, Pa., he developed a strong work ethic and a strong desire to succeed. My great-grandfather worked as a traveling salesman for Standard Oil, and dad would travel with him in the summer. He was a natural people person. He later  worked as a soda jerk at Howard Johnson’s and developed a friendship with an older gentleman who came in every night for ice cream and coffee. Dad knew that an extra scoop of ice cream and conversation made for better tips.

The older gentleman, Jack, was a funeral director at one of the local parlors.  One night, Jack asked dad if would be interested in working at the funeral home. In those days, funeral directors always wore suits and drove new Cadillacs. Dad jumped at the offer and spent the next year polishing brass, washing cars and cutting grass before he was allowed to have any interaction with families.

Up until that point, he would have told you that he thought the work was only one step above working at HoJo’s, but  all that changed once he paid his dues.  As he put it: “I saw how the families really appreciated the funeral director.  I thought, in this terrible situation of death, to be able to help people across this bridge, to after death and to have people really care about you for what you’ve done for them, I thought was a really cool thing.” It became his love and passion that eventually led to mortuary school and to becoming a leader in funeral service.

The family relocated to South Florida when dad was a senior in high school.  He continued working in the funeral business.  At the ripe old age of 23, he informed his boss he was opening his own funeral home.  Let’s just say his employer was less than positive with his prospects for dad’s success.

In his first year in business, he served more than 300 families.  He was one of the first to build a funeral home on a cemetery. Dad was always looking to meet future needs and, therefore, founded Thomas-Pierce & Company, which has since represented more than $2.5 billion worth of independent funeral homes and cemeteries with their succession planning needs.  If Jon Thomas told you he was going to do something, he did it.

My Father also served in politics.  His senate desk from the old capitol is now in the lobby of Forest Meadows Funeral Home.  Please stop by to see a piece of history!

Many people knew that he had medical issues over the last 10 years. Honestly, it’s how we decided as a family to move to Gainesville. Dad had a lot of time on his hands while waiting on his liver transplant at Shands. Reading the Wall Street Journal, he read that Home Depot was sponsoring the Soap Box Derby across the country. Dad told family and friends that once he had his transplant, the Soap Box Derby would come back to Tallahassee.  Lo and behold, in 2004, dad put on one of the largest events in the Derby’s history. The National Derby Association honored him by allowing him to race one of the “adult” cars in Akron, Ohio.

Jon Thomas lived an amazing life. We could write a book about all the great fishing trips (his personal best, a 103-pound cobia) and hunting trips (quail hunting the Ford Plantation on horseback) and classic car tours that we enjoyed together.  As his son, he was my hero and mentor.  But that wealth of knowledge and compassion did not stop with us. If there can be any measure of a man’s success in life, it’s not only the lives that he touches but the lives he improves. Whether he knew you or not, dad wanted to help you.

Every life has a story and it’s important that each story be told appropriately. Dad always equated life to a play. The funeral business is the “final act” for us all, and my dad wanted to be sure it was done right. Whenever it was time for a funeral service, it was “show time.”

Whether it is at the office, the funeral home, the dinner table or a Rotary breakfast, we will greatly miss Jon Thomas. He and his legacy will always be with us. Dad certainly left this world better than he found it and expressed his love for his fellow man. Many of his friends and business associates across the country knew him as an accomplished business man and politician — or as the “rainmaker.”

Who was Jon Thomas?  He was a man of his word, a creative innovator that never gave up — and most importantly, he was my dad. 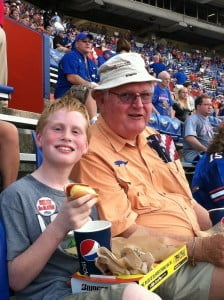 Dad and Charlie enjoying a hot dog at a Gator Game

A special thanks to our Friends at Home Magazine for originally publishing this article and allowing us to publish it here on our Blog.

← How we got to Gainesville
Pandora’s Box →