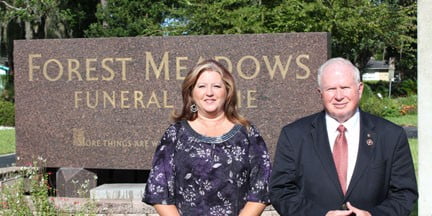 With the President of Moring Funeral Home retiring later this year, the two companies will combine and serve both the Melrose and Gainesville communities from the Forest Meadows location.

The Founder of Moring Funeral Home, Badger Moring, has served in the funeral industry for the last 51 years. He plans to work in the Forest Meadows Funeral Home until he retires later this year. He and Tracie Brown will continue to represent the company within both the Melrose area.

The Forest Meadows Funeral Home has served the Alachua County since 1951. They are currently the only total care provider for funeral home, cremation, and cemetery needs within Gainesville. To find out more information about Forest Meadows and their upcoming merger, visit their website directly at www.forestmeadowsfh.com.