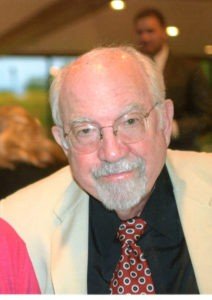 Barry Joseph Guinagh died Feb 13, 2019, in Gainesville, FL. He was born June 28,1941 in Lincoln, Nebraska, to Kevin Joseph Guinagh and Marie Rita Thomas Guinagh.  Six weeks after Barry’s birth, the family returned to Charleston, Illinois, where Barry grew up. The family home was near Old Main, the main building at Eastern Illinois University where his dad was Professor and Dean. After graduating from Charleston High School, Barry earned a degree in physics (BA) at Eastern (1963).

Barry moved on to Michigan State University, where he earned an MS in Physics in 1964, a MA (1967) and PhD (1969) in Educational Psychology.  He moved to the University of Florida in 1968 where he did research and joined the College of Education faculty. He retired in 1999. Among his published writings was a book entitled Catharsis and Cognition in Psychotherapy.  In his own life, he had experienced many approaches to managing depression.

Barry married Rebecca Jeanne Robinson in 1965.  They raised two sons, Brady Joseph and Brennan James.  Because of Brady’s challenging birth and diagnosis of cerebral palsy, Barry promoted healthier practices in birthing and infant care.  Along with colleague Dr. Mary Kay Dykes, he challenged the public schools to open a program for physically impaired students. As Brennan was growing up, Barry coached his soccer and basketball teams.

In addition to his wife and sons, Barry is survived by Brennan’s wife Lynn, grandchildren Riley and Avery and by cousins in Pittsburgh.

A Memorial Service to celebrate Barry’s life will be held Saturday March 2, at 3:00 PM at the United Church of Gainesville, 1624 NW 5th Avenue, with a reception following in Reimer Hall. Barry’s Family will have a committal service at Forest Meadows Cemetery