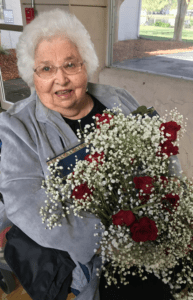 Eugenia (Jean) Hebel died peacefully at Arbor Terrace Memory Care, Ponte Vedra Beach, on Monday, May 13, 2019, the Feast Day of Our Lady of Fatima. She was 89 years old. Jean was born in Lysa Gora, Poland, near Krakow, and was raised on her father’s farm. Soviet troops confiscated the family farm during WWII and sent the family to an internment camp in Siberia. Upon their release they had to make their own way to Poland, but the trip was affected by her father’s death in Uzbekistan. Her mother, unable to provide for Jean and her brother Joe, entrusted them to a war orphan program, eventually landing in Santa Rosa Orphanage, Mexico. She and Joe eventually immigrated to Chicago, IL sponsored by the Polish National Alliance. It was there she eventually met her future Husband, Roy B. Hebel who became a career US Air Force pilot. Jean continued her nomadic sojourn as an Air Force wife bearing and raising their three children: Terry, Roy A. and Garry. After her husband’s eventual Air Force retirement, she remained in Gainesville, where Roy had taughtROTC at the University of Florida.

Jean’s life was forever affected by her years in Siberia, but it was her devout Catholic faith that helped her cope with her youth and her life, as best she could. She was ecstatic to learn a Polish Cardinal had become Pope John Paul II. It’s no small coincidence that both Mom and Pope John Paul II were strongly devoted to the Blessed Virgin Mary. Jean was a loving mother and wife, as well as an awesome cook. Despite numerous attempts, her spaghetti sauce could never be
duplicated. Eugenia also loved flowers, especially roses and orchids. When not in the house, she could always be seen lovingly attending to her flowers, which naturally spread into her home. Mom was a long-standing member of Holy Faith Catholic Church in Gainesville, where she cultivated many cherished friendships, bonded in the Lord. Jean was pre-deceased by her husband Roy in 2006. She leaves her children, Theresa Greaves (Tom); Roy A. Hebel (Debbie); and Garry B. Hebel (Marie); 7 grand-children, 8 great-grand-children and one on the way, left to cherish her memory. She will be sorely missed by her family and friends, but there is comfort in understanding that her life-long struggle with the experiences of her youth are now transformed into eternal joy with her Lord and Savior Jesus Christ. Services will be held at Holy Faith Catholic Church in Gainesville Florida, Saturday, May 18, 2019, at 1:00PM. Viewing will occur prior to the services, starting at 12:30 PM. A Reception at the Family Life Center will follow the service. After the reception, there will be a procession to Forest Meadows Cemetery for a brief grave side service. In lieu of flowers please make a donation to Eugenia and Roy’s favorite charity:
Disciples of the Lord Jesus Christ, PO Box 64, Prayer Town, TX 79010-0064, www.dljc.org (806)534-2312