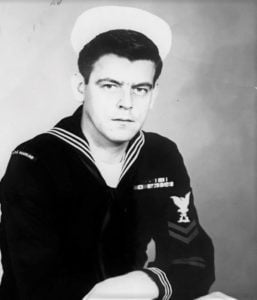 David L Fogg was taken home on Friday February 14,2020 to be with the Lord.  He was a resident of Newberry Florida since 2005. David was born on April 7, 1939 to Ernest and Freda Fogg in Portland Maine. David was known though out the community as a Proud Navy Veteran. Always flying the American Flag proudly from his front porch for all to see.  David dedicated a total of 30 years to the Navy. From 1956 to 1976 he was active duty. He did two tours in Vietnam. He retired from the Naval Air Station in Corpus Christi Texas. David was a member of the Freemasonry and VFW Post # 149 in Newberry Fl.

David was preceded in death by his Father Ernest and Mother Freda (Nana). Brothers and Sisters Donald, Iris, Joan, Sandy, Marion, Stephen and Kenneth. He is survived by his wife Paula Kay, His children include daughter Paula Ann & Son in law Alfred Tenorio, his son Steven David & daughter in law Amber Fogg. David L Jr and Mary Ann.  His Brothers Bobby, Buddy and Mike and his twin sister Diane. He was a proud Grandpa of Brianna, Gabriel and Allison.

With love, Honor and Respect the Cranky Yankee from Newberry Florida will be truly missed.

David’s family and friends will gather on Saturday, February 29, 2020, from 10-11 am, at the Forest Meadows Memorial Park – Chapel in the Meadows, 4100 NW 39th Avenue, Gainesville, FL. 32606. Funeral Services and Military Honors will begin at 11 AM. David will be inurned at Florida National Cemetery, in Bushnell, FL.