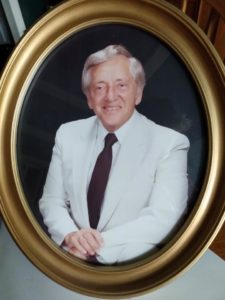 Harry Kimmel passed away on June 13, 2020 at the age of  102   . He was the last survivor of nine children born to Benjamin and Mary Ellen Musser Kimmel of Camp Hill, Pennsylvania. Honors graduate of 1935 from  Enola High School , PA. Mr. Kimmel served in the US Army from 1941-1945 as Master Sargent  in the European theater during WWII, receiving the  Commendation Ribbon for his service in Germany and Austria.  He recently traveled to Washington , D.C. on the Honor Flight  from Gainesville. Florida.

After his service he worked for Farm Bureau Ins. Co. which later became Nationwide Insurance Company. He was Regional Area Manager and Regional Controller in Harrisburg, P A and was asked to oversee the development of the office in Gainesville, Florida where he was RAM and Regional Controller  until his retirement in Dec.1982 after 38 years with the company.

Harry enjoyed walking, playing his harmonica, boxing, fishing, golfing and traveling. He and his wife Louise traveled to all 49 continental United States, Alaska, Canada, Central America and The Holy Lands. They also made candy for friends and family at Christmas.

Preceding in death are his eight siblings, wives Audrey Vance Kimmel and Louise Notaro Kimmel.  He is survived by daughters Karen Johnson, Kathy Waering, and Karyle Lindsay and their spouses as well as step-daughter Renae Shea and step-son Ed Naotaro and their spouses plus 8 grandchildren and 14 great-grandchildren.

He influenced many during his lifetime and now rests in the arms of his Lord Jesus.

Any remembrance donations should be made in his name to the Shriner’s Children’s Hospital VFW, Your Personal Church or the Billy Graham Crusade.