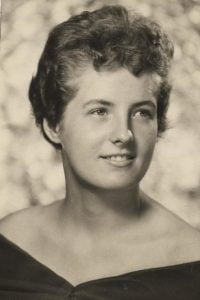 Services for Judith A. (Judy) Bowers (Mahowald, Sheehan) will be held on October 14, 2021, at Forest Meadows Memorial Park Central – Mausoleum. The family and friends will gather in the mausoleum from 10 -11 AM with the funeral service to be held at 11 AM. Judith, loving wife and mother, passed away in Gainesville, Florida on October 4, 2021 at 9:57 am EDT. Judy was born in San Diego, California on October 1, 1942 (79 years old). She leaves behind one loving Aunt, Joyce Holm Mortensen, two loving daughters, Denise L. Sheehan (Dana Bratcher) of Reno, Nevada and Deborah L. Sheehan Engstrom (Mark Engstrom) of Gainesville, Florida, as well as two loving Grandchildren, Sabrina Marie Rae Engstrom and John Fielding Meigs Engstrom II of Gainesville, Florida.

She was preceded in death by her spouses, Robert Elder and John Sheehan, her grandparents, Severine and Florence Holm, her parents, Robert Mahowald and Lucille Holm Mahowald, as well as her Great Aunts and Uncles, all of whom enjoyed doting on her in her youth, including Mildred (Sissy and Gus) Lundgren, Jack (Margaret) and Raymond (Loretta) Mahowald), Jean Holm Spence (Robert), Raymond (Bud and Emmy) Holm, Marian Holm Pancratz (Ray), her cousins, as well as many friends.

She was a very social adventurer who lived in San Diego, California, Mankato and Kasota, Minnesota, Reno, Nevada, Glenview and Rolling Meadows, Illinois, Ft. Lauderdale and finally Gainesville, Florida where she settled to be near her grandchildren. She graduated high school from Bishop Manogue Catholic High School in Reno, Nevada, class of 1960, and became a professional medical transcriptionist following her parenting years.

She will be remembered warmly by all who knew and loved her.