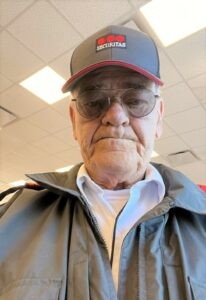 Mac served his country honorably for thirty years in the United States Navy and Naval Reserve. Once retired he went to work as a security officer at Argos Concrete Plant in Newberry, Florida where he rose to the rank of Post Commander. He was a member of the Veteran of Foreign Wars (VFW Post 2811) where he called BINGO. His passion was in gardening, especially roses, BINGO, NASCAR (Dale Earnhardt) and his puppies.

Mac is survived by his wife, Flora (Turner) McLaughlin of Gainesville, his daughters, Vicki Lane and her husband Jamie of Birmingham, Alabama, and Tammy Loeffler of Gainesville, by two brothers, Charles and John McLaughlin, a sister, Dorothy Perry, a stepson, Robert Johnson, three stepdaughters, Donna Whitehead, Tina Williams, and Michelle Roy, as well as fourteen grandchildren and two great-grandchildren. He was preceded in death by his first wife, Carolyn (Wright) McLaughlin and a brother, Robert McLaughlin.