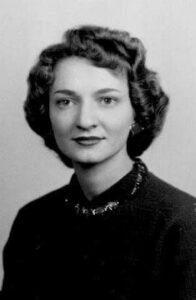 Doris McKee Brown, 90, passed away peacefully in her sleep on September 19, 2022 after a long battle with lung disease. She was born August 2, 1932 in Ohio but, as a young child her family moved to Balboa, Panama, where her father was an integral part of the development & building of the Panama Canal. She grew up in the Canal Zone until her mid-20’s, when she returned to the states to start her family.

We will remember her smile, her warmth, her energy, her love for life, family and friends. She worked very hard during her time here and made a difference in the lives of many. Doris was a smart, witty, talented, faith-filled, and extremely strong woman but, she never wanted anyone to make a fuss over her.