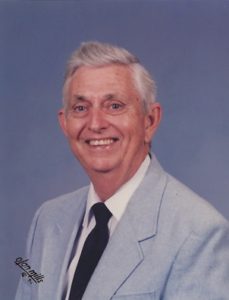 Upon graduation from high school, Doug served in the US Navy aboard the USS Nevada and fought in the South Pacific in World War II.  He then attended the University of Florida and graduated in 1950 with a BS in Forestry.  He worked for Florida Farm Bureau as an insurance Underwriter for 33 years until retirement.

In 1956, he married his wife, Bunny. They were happily married for 60 years.   After moving from Winter Haven, they resided in Gainesville, where they raised two loving daughters, who they were immensely proud of.  Doug had a passion and extraordinary talent for gardening.       He grew all kinds of fruits and vegetables, citrus trees,  camellias and had an extensive orchid collection.  He was an  avid reader of non-fiction and liked to work crossword puzzles.  He loved Gators sports, especially basketball.  He also enjoyed watching the Rick Steves Travel show daily.

Along with his wife, Bunny, he was a charter member of Trinity United Methodist church and ushered, served on many committees, and was a teacher and member of the Wesley Sunday School class for many years.  He and Bunny also enjoyed the Wednesday night suppers and the Alert luncheons in the later years.  His faith was always extremely important to him and up until the last few months of his life, he rarely missed a Sunday worship service.  He gave generously to Trinity’s as well as numerous other charities.

Doug was preceded in death by his wife, Phyllis “Bunny” Campbell and daughter, Patricia Campbell Merchant.

He is survived by daughter, Suzanne Lister (Mark) and grandchildren Kristian Merchant, Anna Merchant and Samuel Lister.  He also leaves behind a sister-in-law, Helen Gaia, son-in-law Richard Merchant(Sue), Grace Merchant and many cousins, nieces and nephews.

A memorial service will be held in the Chapel at Trinity United Methodist, on Saturday, February 8, 2020 at 11am with a reception to follow. Private burial will be held at Forest Meadows Central Cemetery.

In lieu of flowers, please donate to the family’s charity, crazygoodfoundation.org or the charity of your choice.