Alvin C. Warnick was born November 15,1920, along with a fraternal twin, Calvin. His parents, Parley Peter Warnick and Grace Cropper, were livestock farmers near Hinckley, Utah and Alvin, Cal, and their older brothers, Waldo and Marion, grew up as “Four Boys on a Farm”. He attended public school in Hinckley, graduating in May, 1938.  He became an Eagle Scout and was active in school, church and sports.

Alvin attended Utah State University and graduated in June 1942 with a degree in Animal Husbandry and was offered a fellowship at the University of Wisconsin. He joined the Army Air Corps in Salt Lake City. He was one of the first radar technicians in the military receiving training in both the U.S. and England before being assigned to the 100th Bomb Group in the 8th Air Force where he supported combat missions from 1943 to 1945.

After the war Alvin earned his Masters and PhD degrees in Animal Science and Genetics in 1947 and 1950, respectively, from the University of Wisconsin in Madison. . His first teaching position was at Oregon State University in Corvallis for four years followed by a thirty-seven year career as an Animal Physiologist at University of Florida Department of Animal Science.

He co-authored four books and published over 350 research papers, either as sole or joint author.  He also did sabbatical research in Argentina for the Food and Agriculture Organization of the United Nations in 1962-63, and further research in Brazil in 1977 and in Ethiopia in 1986.

Alvin had 70 Masters and PhD students and was a graduate and undergraduate advisor to countless more. He also served as Assistant Chairman of the Animal Science Department at the University of Florida.   After retirement in 1990 he continued as an active contributor and participant at beef cattle workshops throughout Florida, gave lectures in the College of Veterinary Medicine and participated in international conferences in Canada, Brazil, Australia, Sweden and Hungary.

Alvin was elected a Fellow in the American Society of Animal Science (1984) and inducted into the Florida Agricultural Hall of Fame in 2015.

He was also a member of the University City Kiwanis, Atheneum Society, and the Oak Hammock Singers. He was a member of Alpha Zeta, Phi Kappa Phi and the American Society of Animal Science. He was an active member of the Church of Jesus Christ of Latter-day Saints, serving in bishoprics and on church high councils in both Jacksonville and Gainesville.

He married Barbara Webster of Oshkosh, Wisconsin, in August, 1947. Barbara passed away in May, 2003 after almost 56 years of marital bliss. After her death Alvin became a proud resident of the Oak Hammock community, where he served as honorary “Mayor”.

Alvin had a great love of growing citrus and sharing the fruit with friends and neighbors. He was famous for his ability to connect with people. Alvin was a great friend to people from all walks of life, young and old.

Alvin is survived by his son, John A. Warnick (Carol) of Denver, Colorado, his daughter Ann Warnick of Asheville, NC, and his daughter Mary Warnick Dargan (John Dargan) of DeLand, FL. Alvin also has seven grandchildren and 15 great-grandchildren. He was preceded in death by his parents and three brothers, Waldo, Marion, and Cal.

In lieu of flowers, the family suggests memorial contributions be made to your favorite charity, to the American Cancer Society or the Koger-Warnick Scholarship Fund (#013637) at the University of Florida Foundation, PO Box 14425, Gainesville, FL 32604 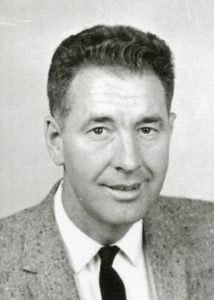