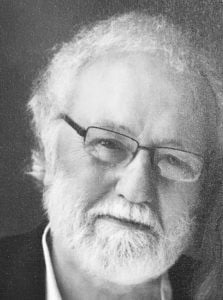 ANDRE NORMAN GALLOIS passed away of complications resulting from pulmonary fibrosis on Tuesday, September 3, 2019, at his home in Gainesville, Florida. Four years ago, he was diagnosed with the disease and given to believe that one survives this terrible disease historically for only three years

from its onset. For Four years he struggled valiantly with the worsening disease, using breathing machines of all ilk and number set at ever higher oxygen levels, until his breathing finally failed him. He is survived by his two daughters Esther Gallois of Brooklyn, NY, and Julia Gallois of Melbourne, Australia, by Cindy Gallois and Christy Gallois, both of Brisbane, Australia, as well as by his partner of many years

Jacqueline Dufty, of Gainesville, Florida. Andre was forever over the moon for his daughters. Andre retired in May of 2018, from the Department of Philosophy, Syracuse University, where he had been

professor since 2001. He came to Gainesville in June 2018. Andre was the author of two books and a number of articles. He was a beloved teacher and faculty colleague in every institution he joined. He earned his undergraduate degree at Sussex University in Sussex, England, and his BPhil degree

in Philosophy at Oxford University, England. His first faculty appointment after Oxford was in the Philosophy Department of the University of Florida in Gainesville, Florida, in 1971. He loved Gainesville, its culture, its landscape, the woods. He left Gainesville in the mid-seventies and moved to

Melbourne, Australia, where his wife Cindy had taken a faculty position. There he joined the faculty of the Department of Philosophy at Monash University. After that he moved to Brisbane in Queensland, Australia, to join the faculty, where he served as chairman of the Philosophy Department for 17 years. In the 1990’s He joined the Philosophy faculty at the prestigious Keele University in the Midlands, England, and taught and did research there for 7 years. When Keele University declined in National funding,

Andre left to join the Syracuse Philosophy Department in 2001. Andre spoke with a beautiful BBC accent, the gift of his mother Dorothy Pratt of Liverpool who was a gifted actress and elocution teacher. From his father Felix Gallois of Paris, who apparently closely resembled the Shah of Iran, we are not sure what he was given. Maybe his love of submarines and ships in general. His father was a romantic who ran away to sea and served in the Free French Army, was imprisoned in a German camp, escaped, and served on the French and English convoy ships to deliver supplies to Russia during WW II. Andre’s childhood was curious. Between ages 7 and 14 he would spend summers in Paris with his father and his

father’s family. His Aunt Raymonde owned a hotel, the “Family Hotel”, just off the Seine on the Right Bank, and down the street from Coco Chanel’s couture shop. During the war, Raymonde worked for the French Resistance, hid people downstairs and hosted the Nazis upstairs during the German Occupation. On his visits to his father, Andre spent much time in the hotel, way up under the eaves reading and

went off by himself during the day to theatres and films and art museums. When he was 15, he dropped out of school in Liverpool and was encouraged by his mother to try his hand at many different Trades – baking, printing, ….. all to no avail. At the same time, he had long been fascinated by problems

dealt with by various Philosophical giants and found himself reading Wittgenstein and Russell and Hume and listening to works by obscure musical composers, all discovered on his own. With no official academic training he applied to the newly opened Sussex University in the south of England and was interviewed by Timothy Sprigge. As he left after the interview, he was discouraged and overheard the interviewers remark “extraordinary”, a comment mistakenly taken by Andre as a negative reaction. Days later he was to receive an invitation to enroll in the university. He loved Sussex and all that he experienced there. Timothy Sprigge became a special mentor to Andre and Andre a special pupil to Timothy. Everybody loved/loves Andre, not just for his abilities in philosophical thinking, which were universally considered to be enormous, but for his legendary kindness and generosity. He gave hopelessly, obsessively, to the homeless and to the downtrodden. He never ate meat or killed insects. He is also loved for his wit, his sharp mind, his ability to make fine distinctions. He was lovable, modest, unpretentious, complicated, completely unworldly. Hated formality. Couldn’t bear to wear suits or a tie. Couldn’t bear to be the center of attention. Didn’t care to be the best housekeeper. Was very messy in fact. Was always interested in others. He was widely read in literature and Poetry and history and knowledgeable about art and music. He was a treasure to discuss everything and anything with, not just philosophy. Many people are already missing Andre. The dearest, most unusual, fine soul. There will be a special service to commemorate all that is/was Andre on Sunday, September 15th , at 2pm at his home: 5400 NW 39th Avenue, Apartment CC273, Huntington Lakes Apartments. He will have been cremated {his preference} the Friday before. We are so hoping that you will be able to join us. In closing, a little Haiku poem by Basho might not be an unfitting way to capture a little of what Andre is/was: “Don’t worry spiders, I keep house casually.” Arrangements are under the care of Forest Meadows Funeral Home, 725 NW 23rd AVE, Gainesville, Fl, 32609, 352-378-2528