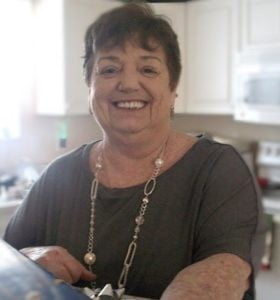 We all know how much Arleen loved George Clooney. Almost as much as she loved the Miami Dolphins….almost. And in the short period of time that we are given on earth, what an impact Arleen has made on all of us with hers.

Arleen was born in Jersey City, New Jersey and she was the first child for Samuel and Mildred Dolgow. Arleen had two sisters, Judith Wyatt and the Karen Parsons, who passed away in 1995. Arleen’s brother is a Navy and Vietnam Veteran, Barry Dolgow. Arleen was loved by the entire Dolgow family. She was treasured by all that knew her and was a beautiful, adventurous child. Arleen loved going to her Maternal Grandparent’s Soda Shop and Candy Store, which is why all of her family grew up loving sugar and sweets.  She also loved riding the bus down the avenue that her father drove and was a family owned bus line.  Her Grandma Toby lived across from Bayonne Park and this was a beautiful place to play, and a fabulous place to visit as an adult.  Getting ice cream from the Good Humor truck in the park was definitely a high light at the end of a day full of playing on the swings.

When Arleen was a teenager the family moved to Miami. She was married to Jimmy Monroe. They raised three loving children, James Michael, Bette Jo and Richard Scott. She loved the theater and dancing.  One time at a dance recital, Arleen and Jamie were on the stage and Jamie’s tail flew off. In the audience, Arleen’s father (Grandpa Sam) was hysterically laughing and the entire audience watched him for a while.  Arleen always laughed about this too (not sure if Jamie did).

Many years later she met Eldon Ward (Bud) and they had 2 beautiful children, Bobby and Becky.  She loved them with every breath in her.

A large portion of Arleen’s life was spent working and caring for disabled patients. She worked for many years at the Florida State Hospital in Pembroke Pines.  She was a valuable asset to the Hospital, she wrote articles for their newspaper and was commended on numerous occasions for her outstanding care of the patients.  One time she organized a trip for the patients to the beach in Hollywood, most of these patients had not been outside the hospital, or had ever traveled to the beach.  Many were wheelchair bound and all had disabilities.  This was an accomplishment that no other had ever taken on for this population.  She was highly recognized and commended for this.  She had deep sense of right and wrong for those that suffered with disabilities.  Arleen was always a champion for those that could not speak or care for themselves.  She was selfless in her devotion to caring for others.

At the state hospital she met Ernie (Ernest Moulson). They fell in love, married and years later moved the Gainesville where they built a wonderful life together.  Arleen worked at Tacachale in Gainesville caring for disabled patients.

16 years ago her daughter Becky left this world unexpectedly and Arleen raised her daughter Brittney Kelly as her own.  She was her mother, grandmother, and her best friend. Together they traveled all over the country with the production Dragon Tails and Arleen was so happy living the dream with Brittney. Arleen was always so proud of Brittney.

Arleen had so many friends and was loved by all. But her family was the most important thing in the world to her.

Arleen loved her many birds, dogs and cats that she had, and Bella was no exception, even before she passed away she asked to see Bella and of course her daughter Bette Jo came immediately with the dog to the hospital.

Arleen and her sister Judy spent so much time together these past few years, shopping, dining out and decorating her beach room.  Red Lobster, Sonny’s Barbeque, and Dunkin Donuts were just of few of her favorite dinning places.  They would always plan where they were going to eat long before Judy came up for the visit. This was a highlight for Judy and Arleen. They were always working on Arleen’s bucket list.

Last year Judy had the pleasure of completing Arleen’s bucket list with her, although she did add another trip to the beach which she said she had to do so that she could have a goal.  So last year for her birthday Judy surprised Arleen with a day trip to the beach. They had ices, lunch out, and she got her toes in the sand and was able to breathe in the fresh salty air.  It was a fabulous day.

Judy said that this poem always reminded her of Arleen:

Life should not be a journey to the grave with the intention of arriving well preserved. But to skid in sideways chocolate in one hand, wine in the other screaming “woo hoo what a ride”. And whenever you feel you will never see light, feel warmth, or be happy again, just remember, somewhere on earth right now the sun is shining.

Even though Arleen’s last days were spent in a hospital, she never lost her attractive personality, spunk, or her sense of humor. Arleen became friend’s with all of the nurses who treated her. And even though these Nurses treat so many patient day in and day out, there was a special connection between them and Arleen. Many of her last days were spent surrounded by her loving family who were with her until the end. Her daughter BJ rarely missed a day traveling to the hospital to see her mom and would stay there for hours and hours. BJ and Brittney were holding her hands as she peacefully left this world into the next, only to be met by those who went before her, Becky, Karen, her parents, and many others. And as we all face the truth that this life is like a vapor, we can have peace knowing that she is watching over us (in between the Gator and the Dolphin games of course), and will be waiting for us all to meet her on the other side.