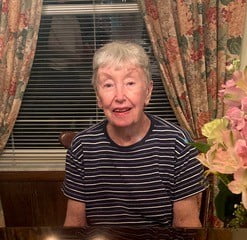 Barbara Anne McNeill, 90, of Gainesville, Florida, passed away on 2 February 2021 in Gainesville.

A Funeral mass will be held at Holy Faith Catholic Church on 20 February at 9 am. Interment will follow at Forest Meadows Cemetery West. Forest Meadows Funeral Home is handling the funeral arrangements.

Barbara was born in Bay Ridge, Brooklyn, New York to William Frederick Clemens and Genevieve Ryan Clemens on 12 October 1930. She went to high school at St. Saviour in Brooklyn and graduated in 1948. She went on to earn a nursing degree in 1951 from St. Vincent’s School of Nursing in Manhattan. She then worked at St. Vincent’s Hospital before becoming a school nurse for the Hempstead Public School System. During this time, she raised four children. She retired in 1986 and relocated to Gainesville.