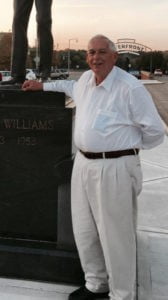 Bernabe Aramis Hernandez, age 74 of Alachua, Florida died in the comfort of his home due to natural causes on Wednesday, November 21, 2018.
Bernabe was born on August 23, 1944 in Havana, Cuba to the late Gilberto Hernandez and Santiaga Maestre.  He left Cuba in 1954 and moved to New York City where he met and married his love Martha M. Ramirez.  Together they moved to Miami, Florida where he continued his education at the University of Miami receiving his degree in Civil Engineering and later his Doctorate in Environmental Engineering.
Bernabe was Roman Catholic by faith but shared a love of all philosophies.  An avid and enthusiastic reader, collector of knowledge, and teacher he shared life with all who listened.  Often deep in thought he expressed himself skillfully and beautifully through painting, drawing, and the mastery of writing.  As a loving husband, father, grandfather, brother and loved one Bernie will be greatly missed.
Bernabe was proceeded in death by his parents and his sister-in-law Mayda Gutierrez de Pineres.  He is survived by his loving wife of 49 years, Martha as well as his daughter Nathalia and family, son Aramis and family, brother Ralph and family and many cousins.
A Memorial Gathering will be held on Tuesday, November 27, 2018, from 2-4PM at the Forest Meadows Funeral Home 725 NW 23 Avenue, Gainesville, Florida 32609.  The Memorial Service will follow at the funeral home at 4PM.  Thanks to all.