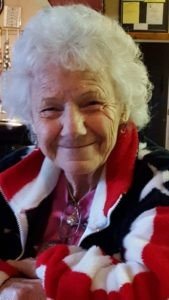 Bertha Arline (Bierhalter) Dewey, beloved wife, mother and grandmother, passed away April 20, 2020 at Shands UF Health, Gainesville, Florida. Bertha was born in South Haven, MI to August and Donna (Maynard) Bierhalter, on July 22, 1931, the 6th of 11 children. She married Duane Dewey May 14, 1951, while he was on leave from the Marines, prior to being sent to Korea.

In 1973, after living in South Haven, Michigan for several years, Duane and Bertha sold their house and moved to Irons, Michigan to their hunting cabin. That same year they started their annual trek to Florida for the winter.

Bertha worked for several years at the South Haven Rubber Company. She is a past President of the VFW Post #667 Auxiliary. She has volunteered many hours at the American Legion Post #49 and the VFW Post #667, both of South Haven, and AMVETS Post #1988 of Baldwin, MI. While in Florida, she was involved with fundraising for the Cross Creek Fire Department, Vet Space, and Military Stand Downs. Scrapbooking and sewing were her favorite hobbies.

Funeral arrangements/memorial service will be announced at a later date.

Memorial contributions can be made in Bertha’s honor to your favorite Veterans Organization Auxiliary.