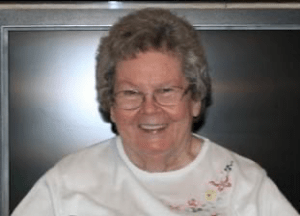 Betty Jean Gales, age 90, passed away on Saturday, November 5, 2022, after a short illness. Betty was born on Thursday, February 4, 1932, in Henagar, Alabama. She was the daughter of Elbert Franklin and Berlie Defrecy Kerby Farris. She was the third of six children.

Betty went on her first date with Clayton on April 9, 1950, and they never dated anyone else. They were married on February 8, 1952, until Clayton’s death on October 20, 2007. Betty, Clayton and their three children traveled all over the world during Clayton’s career with the United States Air Force. They returned to Florida for good in 1973. Betty worked for West Building Materials, Civitan Regional Blood Center, The Older American’s Council, and the Alachua County Library from 1984-1995. Betty was a devoted grandmother. She was a long-time member of Archer Baptist Church. She enjoyed sewing, knitting, bird watching and reading.

She is preceded in death by her parents, her husband, Clayton E. Gales of 55 years, brothers, Ralph, Frank, and Don and sister, Christine.

Per Betty’s request, burial services will be private.