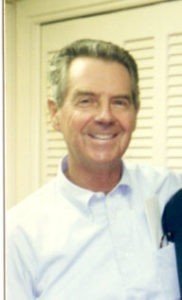 Carl Gustav Carlson went to be with the Lord on Friday, August 24, 2018 surrounded by his loving family.

Carl was born in Hollywood, FL on December 28, 1931. He is a graduate of Winter Park High School in Winter Park, FL and he received a Bachelor of Science in Business Administration from the University of Florida where he was a member of the Sigma Chi fraternity.  Immediately upon graduation he was drafted into the United States Army where he served as a clerk.  Following his discharge, he pursued a career in the insurance industry involving both sales and management.  He began his insurance career with Traveler’s Insurance as an underwriter in Columbus, OH.  It was during this time that he met Regina, his future wife of 50 years. Some time later, he signed on with a regional insurance broker out of Savannah, GA, the John D. Carswell Agency.  He excelled with the firm and rose to the rank of Executive Vice President.  He then moved to Jacksonville where he continued to build a very successful commercial, property and casualty insurance book of business.  He retired in 1997 and subsequently moved to Gainesville, FL where he spent the remainder of his life.

He was an avid fan of Gator athletics of all kinds, and recruited for the football team in the 60’s and 70’s. He loved golf, and was very accomplished, scoring seven hole-in-ones in his lifetime.   Above all, he treasured spending time with his family and friends.

He is survived by his son, Eric Peter (Sarah) Carlson of Orlando, FL, and his daughter Terri (Tony) Milikin, of Richmond, VA, and his three grandchildren, Carlson (25), Christian (23) and Caroline (21).

He was preceded in death by his wife, Regina Bier Carlson, and both parents, Gus and Mary Carlson.

The family will receive visitors at Forest Meadows Funeral Home at 725 NW 23rd Avenue in Gainesville, FL on Thursday, August 30 from 5-7pm.  A funeral mass will be held on Friday, August 31, at 12pm at St. Augustine Catholic Church, 1738 W. University Avenue.  Entombment will follow the mass at Forest Meadows Memorial Park Central Mausoleum at 4100 NW 39th Avenue.  This will be followed by a reception for friends and family at Carl’s home.

In lieu of flowers, please consider a donation to Haven Hospice of Gainesville, FL or the American Cancer Society.