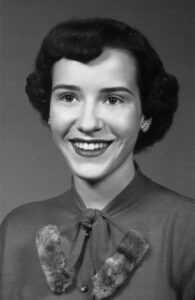 Carolyn Harris Livingston of Gainesville, Fla., died peacefully on August 14, 2022, surrounded by her loving family. She was 86.

Carolyn was a woman of devout faith in Christ. Her passion for music was the foundation of Carolyn’s professional life. Her long career as a noted music educator and choir director was marked by many achievements, awards and accolades. A classically trained soprano, Carolyn sang as a soloist and with numerous choirs over her entire adult life and into her 80s. Carolyn also enjoyed travel, gardening and writing, and was a lifelong, avid reader. In 1987 Carolyn joined the faculty of the University of Rhode Island as an assistant professor in music education. She retired from URI in 2008 as a full professor, including a 10-year stint as director of graduate studies in music. She returned to Gainesville permanently in 2014.

The family suggests that any donations in Carolyn’s memory be made to the Livingston/Zitkin Graduate Scholarship in Music Fund, Department of Music, University of Rhode Island. Flowers arranged by The Plant Shoppe Florist, Gainesville, Fla., phone (352) 371-6249.