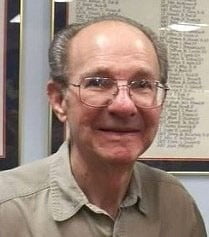 C harles “Charlie” Matthews, age 82, died at his home in Gainesville, FL on Friday, April 14, 2017 surrounded by his family. Charlie was born on August 3, 1934 in Louisburg, NC. After growing up and working on the family farm, Charlie served in the United States Airforce and then worked for Ultrasonic Power Corporation in Trenton, NJ, where he retired in 1984 after 21 years of service. Charlie’s hobbies included bird carving, reading, camping, hiking, sailing, canoeing and family vacations. Charlie was a self-taught man. His lifelong quest for knowledge contributed to his adventurous spirit. He had a passion for riding his motorcycle, traveling over 250,000 miles across 48 states and Canada. In recent years, Charlie enjoyed working in his yard and walking in the neighborhood with his beloved dog, Abby.

The family wishes to thank his private caregivers, Visiting Angels and Haven Hospice. At Charlie’s request, there will be no services. If desired, memorial donations may be made to your favorite local, state or national park, as Charlie loved the great outdoors.