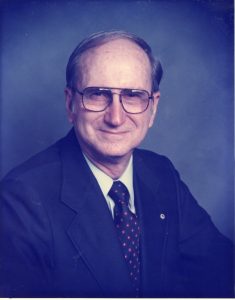 Charles Ray Earnest graduated to his heavenly college, August 21, 2020. Born on February 27, 1924, the first child of Ray and Lois Earnest of Carrolton, Georgia, he grew up in Miami, Florida with his brother, James, and sister, Margaret. Charles demonstrated leadership, mentoring and caring in everything he pursued. Charles loved and served his country. While in the 39th Signal Corps of the US Army in the Second World War, he landed in Normandy, September 1944, then was wounded in France. After recovering, he was sent to Germany. While in camp in southern France preparing to embark to the Pacific theatre, the war ended. As the news spread among the soldiers, he spoke of the roar that passed through the camp like an ocean wave. Like many others, he believed that Harry Truman personally saved his life. Upon returning home on New Year’s Day 1946, he accompanied his father and sister to the Orange Bowl Game, like a good Miamian. He was awarded the Purple Heart, and more recently, Chevalier of the Legion of Honor of France. Charles believed in and highly valued education; so much so, contributing to the education of others became his career. Charles graduated from Miami High School in 1942, where he earned his letter for Track and Field and was a member of the Honor Society. At the University of Florida, he earned his Bachelor&#39;s degree in Education in 1946; and then his Master’s degree in Education in 1950. He was secretary of his senior class, and spoke fondly of his participation in Delta Tau Delta and the Wesley Foundation. Charles ran track for Coach Percy Beard and was a member of the F Club. After returning to Miami, Charles taught at Hialeah Junior High School. In 1957, the family moved to Pensacola, FL, where Charles began his Community College career as Assistant Registrar for the fledgling Pensacola Junior College, then operating from a private two-story house, now Pensacola State College. He became Director of Admissions and later taught at the college’s adult high school, retiring in 1989. He was a member of Phi Delta Kappa and an advocate for the Florida community college system. Charles was a loving, dedicated family man; husband, father, grandfather and great grandfather. Charles married Jeanne Lola Koesy on June 9, 1950. They honeymooned in Murphree Hall at the University of Florida, while he completed his Masters degree in Education, and thoroughly loved one another for 70 years. Moving to Pensacola in 1957, and remaining there for 48 years, Charles and Jeanne attended St. Mark United Methodist Church, where the family of 7 was active in the life of the church.
With his family and friends, he enjoyed picnics and swimming, first at Miami Beach, then Pensacola Beach; cookouts in the backyard with crispy barbecued chicken, watermelon, and
home churned ice cream; and hosting Sunday lunches after church. Uncle Charlie served as President Emeritus of the family’s Clean Plate Club. Charles was always involved in serving his community. For most of his adult life, Charles was a member of the Exchange Club of Pensacola, and later in Gainesville, serving in various roles including President of the Pensacola Chapter. He was active in the Arthritis Association and the Pensacola Dinner Club, serving as president in both organizations in Pensacola. His tri-corner hat was readily available for gatherings with the Sons of the American Revolution. Upon retirement, Charles’ love of learning and adventure continued. He and Jeanne cultivated camellias and traveled as Camellia Society judges. They traveled, often by cruise ship, to visit all seven continents. Their adventures included walking the Great Wall of China, riding camels to the Great Pyramids in Egypt and cruising through the glaciers in Alaska. He became a docent at the Pensacola Museum of Art. Charles and Jeanne returned to Gainesville in 2005, attended Grace United Methodist Church, particularly enjoying the fellowship of the Sojourners Sunday School Class, and enjoyed many friendships while living in The Village of Gainesville for 15 years. Charles is survived by Jeanne, his wife of 70 years; their five children (and spouses): Charles (Judy), Donna (Jim), Margaret (Bill), David (Sheila) and Melissa (Gary); 9 grandchildren: Grant (Meilee) Earnest, Emily Earnest (Andy Fields), Chloe Earnest, Jamie Graves, Jesse Williams, Sarah and Nicole Earnest, Sam and Ella Bennett, his great-grandson Alex Fields, and many loved nieces and nephews. Margaret Earnest Steele, his sister, lives in Coral Gables,
Florida. Charles Earnest lived as a Christian, with a true Servant’s heart. He believed that a Divine Providence preserved him in war and protected and guided his family throughout his lifetime.
Charles often said he was so blessed to have such a wonderful family. The family will have a private service in Gainesville, Florida. In lieu of flowers, contributions can be made to the Exchange Club’s Ray Earnest Americanism Speech Contest through the the Jim Brown Scholarship fund at Florida District Exchange Clubs, c/o Steven Rawlins, 4811 Beach Blvd Suite 300,
Jacksonville, FL 32207 (https://donorbox.org/fdxc-brown-scholarship-fund) or your favorite charity.