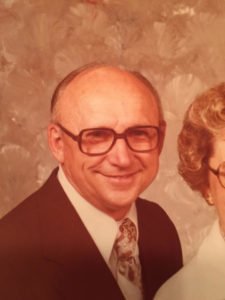 Clifford Swanson Lofgren passed away August 26, 2017, peacefully under the care of Haven Hospice in Gainesville, FL, at the age of 92. Cliff was born on the family farm near St James, Minn., on July 29, 1925. After serving as a medic in the Army, Cliff earned a Bachelors Degree in Science from Gustavus Adolphus College, a Masters Degree from the University of Minnesota, and a Doctors Degree in Philosophy from the University of Florida. While attending Univ. of Minnesota, Cliff met Renee Liljenberg and they married in 1954. Their marriage lasted for 52 years and they raised four children: Joyce, Richard, Judy, and Cindy. Cliff worked for the Department of Agriculture as an Entomologist. The majority of his research dealt with ways to control fire ants and mosquitoes. He loved his work and traveled the world with the World Health Organization helping Counties fight transmitted diseases by insects. Cliff and Renee moved to Gainesville in 1963 and attended First Lutheran and Faith Presbyterian Churches. After Renee’s death in 2007, Cliff spent his time following Gator and Minnesota sports, working in the yard, and enjoying the grandkids. He was a loving husband and father, had a kind heart, and always willing to lend a helping hand. Cliff is survived by his son and daughter, Richard and Cindy (Bill), five grandchildren, Elizabeth, Cliff, Sarah, Emily, and Erin, and eleven great grandchildren.