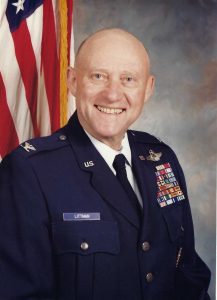 Colonel (Col.) Mayer Littman, USAF (Ret), 92, of Gainesville, Florida, passed away peacefully on November 7, 2021, at his home, surrounded by friends and family.

Col. Mayer Littman was born and raised in Clearfield, Pennsylvania. He started his military career in the Pennsylvania State Guard as a rifleman at age 16. Upon graduating from high
school at 17, he enlisted in the U.S. Navy, where he became a Combat Aircrewman and was trained as a radio operator and machine gunner on Navy torpedo bombers and dive bombers
such as the Douglas Dauntless. After 39 months, he was honorably discharged and attended the University of Maryland (UMD), to pursue a career in physical education; he also wrestled
for UMD. While at the UMD, he took advantage of the Senior Air Force ROTC program and was offered a pilot training slot. He had a Master’s Degree in Administrative, Personnel, and
Guidance with a minor in Psychology, from the University of Southern Mississippi.

Col. Littman was a command pilot accumulating over 5000 hours of military flight time in 14
different Air Force aircraft. He had over 500 hours combat time and 188 missions during two tours of Vietnam with the 14th Special Operations Wing. He also served as a Reconnaissance
Pilot in Korea with the USAF Security Service. He served as a member of the Air Staff in the Pentagon for 4 years specializing in unconventional warfare, counter-insurgency,
psychological operations, and guerrilla warfare. He served on the Organizational Joints Chief of Staff, and was a graduate of the National War College at Ft. McNair.

During Col. Littman’s career, he was an instructor pilot at Goodfellow AFB, San Angelo, Texas (this is also where he met his yellow rose of Texas, Colleen Mapes); Squadron Commander at
Keesler AFB, Biloxi, MS; Security Service Reconnaissance Pilot, flying missions in China and North Korea; and he became the World-Wide Rated Assignments Officer for the Air Force
Logistics Command and flew the C-131 aircraft as one of his commanding general’s pilots. Col. Littman attended Vietnamese language, psychological warfare, and Army Special
Operations training. He attended counterinsurgency and unconventional warfare training at Hurlburt Field, sea survival training, advanced survival at Fairchild AFB, and jungle warfare
training in Panama and the Philippines. He was in the Republic of Vietnam from 1968 – 1970 as a member of the 14th Special Operations Wing/5th Special Forces as a field operative
X. Following this assignment, Col. Littman was assigned to the Pentagon and then was assigned at the American Embassy, Republic of Indonesia, where he was the Deputy Chief of
the U.S. Defense Liaison Group to the Indonesian Armed Forces and a Pilot for the American Ambassador. Upon returning to the States, Col. Littman was assigned to the Pentagon where
he was the Division Chief, Security Assistance Policy Planning Division, J5, Organization of the Joints Chief of Staff. His next assignment was the highlight of his career. He was sent to
Gainesville, FL, as the Professor of Aerospace, DET 150, AFROTC. His last tour of duty was at Ft. Meade, MD, where he was the Commander, Eastern Sector, US Military Entrance and
Processing Command. Col. Littman retired in August 1985, culminating 34 years of active military service.

Col. Littman is the recipient of the Distinguished Flying Cross, Bronze Star, Legion of Merit and Defense Superior Service Medal, the Republic of Vietnam Medal of Honor, Cross of Gallantry with Palm, both Air Force and Army Meritorious Unit Citations, the Presidential Unit Citation, and other assorted Air Force and Army decorations and ribbons.

After his retirement, Col. Littman and his family returned to Vienna, VA, where he spent most of his time focusing on his love of gardening. After a few years of retirement, he accepted an assignment as an Aerospace Science Instructor at Amos P. Godby High School, Tallahassee, FL, where he served from 1990 to 1995. In 1995, Mrs. Littman told him she had had enough of Seminole territory and she was a “Gator’ and was heading back to Gainesville. Upon returning to Gainesville, Col. Littman became a board member of the Gainesville Chapter of the Military Officers Association of America where he served as the Legislative Affairs Officer.

Col. Littman was an avid organic gardener and had a variety of fruit trees, to include his own fig creation called “Col Littman’s Black Cross Fig”. He was a wealth of information regarding soil, composting, bugs, and all plants. The tag on his truck said “TOMATOE” because he was known for his delicious and wide variety of tomatoes from his garden. He operated a vegetable stand at the Herndon Farmer’s Market where he sold vegetables from his garden every weekend. He would decorate his area with fresh flowers and produce from his garden to create funny faces which would attract people for a laugh and a purchase.
Col. Littman was all about health, fitness, and nutrition. In his younger years, he was a competitive weight lifter. The love of fitness followed him throughout his entire life. His favorite
saying was motion is lotion. At 92 years of age, he was walking a mile everyday with his rollator. He used TheraBand Resistance Bands for his arm exercises. He was always up for a
protein smoothie.

Col. Littman had a great sense of humor, an infectious laugh, and was always up for a good story or joke. There was never a dull moment if you were hanging out with the “Colonel”.

Col. Littman was preceded in death by his beloved wife of 58 years, Colleen Mapes Littman. He was the youngest of six siblings, all which preceded him in death. He is survived by his
son, Joseph Littman, his daughter, Leah DePriest, his son-in-law, Mickey DePriest, and his grandson, Ryan DePriest.

The family would like to give a special thank you to his caregivers, Ann and Bonnie.

In lieu of flowers, memorial donations may be made in Mayer Littman’s honor to the Wounded
Warrior Project which can be found on the website: woundedwarriorproject.org. Arrangements under the care of Forest Meadows Funeral Home, 725 NW 23rd Ave, Gainesville, FL, 32609, 352-378-2528