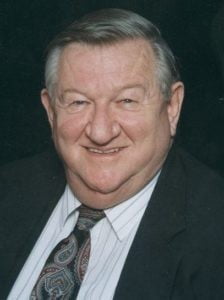 David W. Cromer, Born May 24, 1932, died, December 17, 2017 at ET York Hospice after a long illness. He is survived by his wife, Jackie Roth Cromer, and three children of his previous marriage to Carolyn Lowry Cromer, Douglas (Susan) Cromer of Macon, GA, Donald (Cindy) Cromer of Gainesville, FL, and Susan Cromer Malone of Fairview, TX. He was predeceased by his eldest son, David W. Cromer, Jr. of Lakeland, FL. David’s grandchildren are Christy (Shawn) Cromer Bates, Michael (Raine) Cromer, Danielle Cromer, and Jeffrey Cromer. David graduated from Spartanburg High School, earned a BBA from the University of South Carolina and an MBA from the University of Central Florida. He enlisted in the US Navy during the Korean War, graduated from Officer Candidate School and completed his Naval career as a Lt. Commander in 1975. He spent the next two decades as an operations officer with several major banks in Florida, finishing his career as an auditor with the Florida Department of Revenue. A memorial service will be held on Friday, December 29, 2017, at 2:00pm, Forest Meadows Memorial Park Central

“Chapel in the Meadows”,  4100 NW 39th Ave, Gainesville, FL 32606. Arrangements are under the care of Forest Meadows Funeral Home www.forestmeadowsfh.com