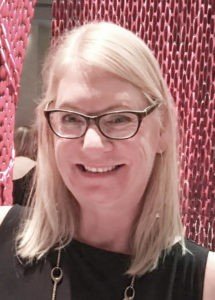 Daughter, Sister, Wife, Aunt, Friend. Diane Drake, 55, died suddenly and unexpectedly the morning of Tuesday, February 5, 2019 from an aneurysm. Her family and friends are devastated by this abrupt loss, but to be honest, Diane would not have wanted her departure from this earth to be any other way. She was, above all, a pragmatist.

Diane Elizabeth Drake was born in Miami Florida to Vitie and Dee Drake who taught her the importance of love and laughter. She was the fifth of their six children and she would tell you, the most adored. Diane was a happy child with stunning bright blonde hair and a go-with-the-flow personality. Her two brothers, Neil and Gary and her three sisters, Gail, Catherine and Mary did indeed adore her.

Diane spent much of her younger years obsessed with dogs and Barbies. In her teenage years, her obsessions turned to reading and snacking. As her two life-long best friends, Michelle and Robyn would tell you, at 15, Diane would prefer a day lounging in bed with a Victorian Historical novel and bag of candy than go with them to look for boys at the lake.

Diane did eventually find her boy though. She met and married Christopher Wick and they were together over 20 years before Chris sadly passed away in 2008 after a long illness. Diane and Chris lived in Miami where they enjoyed their careers, the beach, gardening, travel, their much-loved dogs and spending time with their families.  And Diane reading…always reading!

In Miami, Diane had a long career with Unisa Shoe Company.   She rose from her high school job at a Unisa kiosk in Dadeland Mall selling espadrilles to serving as the company’s Operations and Merchandise Director until 2007. During her rise to power at Unisa, Diane became extremely well versed in the fashion industry and a skilled businesswoman.

2008 was a very difficult year for Diane. Chris was failing and during that difficult time, Diane herself was diagnosed with cancer and began treatments. Her prognosis was extremely poor, but beating all odds, Diane became a medical miracle when she was deemed virtually cancer free six years later.

Diane relocated to Gainesville, Florida in 2012 shortly after her parents moved there. A new era for Diane began as she continued her recovery and assisted her aging parents (both now deceased). Her brother Neil asked her to work at the One Room School House, the charter school Neil founded in Gainesville.  Initially, she was hired as the school secretary. A few years later, anyone at the ORSH would tell you that Diane, now Business Director, literally ran the school. She enjoyed the challenges of this new career, learning much about school administration and working with parents and children in an academic setting. Her colleagues, students and families at One Room will miss her no-nonsense approach and get-it-done attitude.  She made good friends there.

Diane was blessed with many nieces and nephews and they and their families all loved her dearly. She closely followed the lives of Kristy, Sam, Melissa, Corbin, Austin, Harry, Leah, James, Julia, Tom, Nora, Claire, Bridget, Matt, Dylan, Tyler, Kendall, and Hannah and these young people gladly spent time with their “Beloved Aunt Diane.”   Her many in-laws, cousins and friends also mourn her passing.

Diane epitomized what it means to be resilient. She dealt with much more than this short essay can relay and way more than anyone ought to have borne. With grace, intelligence, humor and determination she stood up to the challenges that she faced her entire life and never forgot to have fun.  Her strength was substantial and we, her loved ones, will need to harness some strength in order to bear this loss.

There will be a memorial service for Diane on Saturday, March 30, 2019 in Gainesville to celebrate her and all she meant to us. Details will follow.  A permanent memorial fund in Diane’s name has been established through the VanWallingham Foundation consistent with her wishes. Annual donations in Diane’s name will be made to her favorite charities.