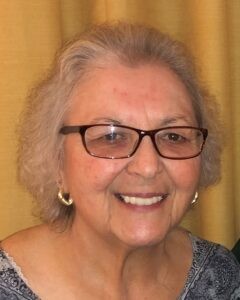 Donna A. Betker, 75, of Gainesville, Florida, passed away peacefully in her sleep on September 14, 2022 in Williston, Florida. Funeral services will be held on Thursday, September 22 at 2 PM at Forest Meadows Cemetery Central chapel, 4100 NW 39th Ave, Gainesville.

Donna was born in Key West, Florida to Ralph and Clarabell Amable on January 31, 1947. She went to Key West High School and graduated in 1964. Donna was a proud member of the Key West High School band, where she played clarinet. She was a member of the 551 club, glee club, Beta club, tri M, and the Keyettes. She was also a Rainbow Girl in Key West Assembly # 13. She went on to become Mother Advisor of Key West Assembly # 13 for many years and made such a positive impact on so many girls’ lives. She was also a member of the Key West chapter of the Order of the Eastern Star.

Donna had a very successful career with the US Government for over 36 years. She worked for the Navy at the US Naval Station for several years, before moving to Fort Lauderdale and working for the US Postal Service. She was an LSM clerk for some time and then became a training tech. She decided to move back to Key West in 1984 where she worked once again for the Navy at NAS Boca Chica as a supply systems analyst. She retired in 2002 as a manager for the supply departmentDonna is preceded in death by her mother Clarabell Amable(Cerezo) And her father Ralph Amable.Donna is survived by her daughters Danielle Gould(Betker) and her husband Paul, Denise Brake(Betker) and her husband Paul, grandchildren Tyler Gould, Haley Gould, Aiden Brake, Abbey Brake, Her sister Darlene Amable, nephew Andrew Gerardi, And many cousins by the dozens.

In lieu of flowers, memorial donations may be made to Haven Hospice and the Alzheimer’s Association.

Donna was an avid Gator fan and wore Gator shirts almost every day! Any sport! She never missed a game. We are asking everyone, whether you are able to attend the service or not, to please wear Orange and Blue in her honor on September 22.