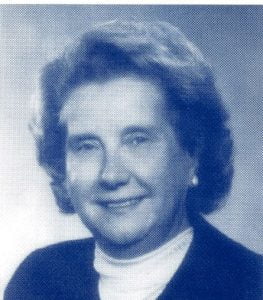 Dr. Ann Bromley Eastwood passed away peacefully December 2, 2020 at Oak mHammock. Ann was 98 years of age. She was the daughter of Edmund Bromley and Anna Strussel of Troy, N.Y. Ann is preceded in death by her husband Dr. Ralph A. Eastwood Sr. and survived by their sons Ralph, Jr. of Las Vegas, NV, and Edward of Tallahassee, FL.

Ann attended the State University of New York and Northwestern University where she earned her doctorate degree in psychology and student personnel services. She was the Dean for Women at the University of Illinois before moving to Gainesville with her husband Ralph in 1957. Ann then was the Director of Psychological Services at the Tacachale Center for Excellence until she started her employment with Santa Fe College (SF) in 1966 where she retired from in 1992. She was a certified Psychologist in both New York and Florida.

Ann was an inspiring and impactful leader for women on the national and local levels. Ann was a past president of the National Association for Women in Education and was the first woman from Florida and from a community college to hold that position. Ann was the first female administrator at SF where she served as Associate Dean for Counseling Services and in later years was managing multiple state and federal grants as Director of Women’s Programs and Special Projects. Ann developed the Displaced Homemaker Program at SF which became a state and regional model to provide training and services for single parents and other re-entry women. She was also a member of the National Association of Women in Community and Junior Colleges.

Ann was an active community leader. Ann was a charter member of the Gainesville Altrusa Club in 1958, a past president, and among many other Altrusa accomplishments, provided leadership to establish the endowed Altrusa – Santa Fe College Scholarship Program for women over the traditional age of college. Ann was an organizer and first chairwoman of the Gainesville Commission on the Status of Women. She was also a co-founder of the Gainesville Area Women’s Network and is credited with the creation of the Women of Distinction Program at Santa Fe College. Ann’s community involvement also included service on the boards of United Way, the Girl’s Club, the North Florida Regional Planning Council, past treasurer of the Florida Psychological Association, and a member of the steering committee for Project Independence. In 1989, Ann was selected as Woman of the Year for the Gainesville Commission on the Status of Women, and in 1990, received the Susan B. Anthony Award, and was named a Woman of Distinction in 1993.

Ann was a visionary leader and her pioneer spirit created avenues to assist women over the traditional age in their pursuit of higher education. Ann’s contributions to this community have greatly enhanced opportunities for women from all walks of life obtain a better life for themselves and their families. She made a difference for many women and continued to provide models for women even through this last stage of her life.

The family is grateful for the dedicated service of the Oak Hammock staff, and for the compassionate care provided by lifelong special friends Belton Mae Greenlee and Monique Shuler, and for an extended family of friends who were part of her care team.

Due to the Covid environment, the family has requested a private service at this time. A Celebration of Life is anticipated in mid 2021. In lieu of flowers, please consider a donation to the Altrusa Santa Fe Scholarship, c/o Santa Fe College Foundation, 3000 NW 83rd Street, F-208, Gainesville, FL 32606 or to the Altrusa House, PO Box 358765, Gainesville, 32635-8765.