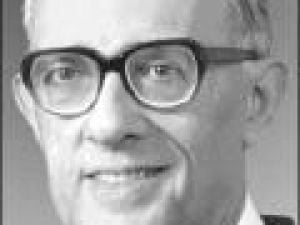 Gainesville – Emmanuel Partheniades passed away on October 31, 2019 at Palm Garden Health and Rehabilitation Center. He was Professor Emeritus in the Department of Mechanical and Aerospace Engineering at the University of Florida. He was best known for his many contributions to hydraulic and coastal engineering. He was 92.

Emmanuel or “Manolis,” as he was known to his friends, was born in Athens, Greece on November 3, 1926. He received his undergraduate degree in Civil Engineering from the Technical University of Athens, in Greece in 1952, and then left Greece for the United States taking an MS degree from the University of California, Berkeley in 1955, and a PhD in 1962 in Hydraulic Engineering. His major professor was Albert Einstein’s son, Hans Albert. From 1952 to 1954 and then from 1955 to 1959, he worked for various consulting firms in both Greece and in the San Francisco Bay area in structures, irrigation and soil mechanics, before pursuing an academic career in the field of Hydraulic Engineering.

Over the course of a long and distinguished career he taught a range of both undergraduate and graduate courses in introductory and advanced fluid mechanics and hydraulics, including harbor and river engineering. His research interests lay primarily in the hydraulics of cohesive sediments and estuary hydrodynamics. He was the author of three books in Greek and wrote numerous chapters in books in English. He authored or co-authored, over sixty research papers, and published numerous proceedings, and technical reports. He served as consultant for the United Nations in India and Argentina, and gave international short courses and seminars. He was also involved in projects in Venezuela on the Maracaibo estuary and in Paraguay where he consulted at the University of Asuncion. He was a member of the American Society of Civil Engineers, the Technical Chamber of Greece and an international estuary study group.

He was predeceased by his wife of 47 years, Dora Gutierrez of Lima, Peru, who passed away in 2014, and to whom he was devoted. He is survived by his sister Chryssa Floros of Athens, Greece. Manolis and Dora had many friends in the Gainesville community, entertained graciously, and were active in the Greek community. Even well after retirement, Manolis returned to the campus he loved and could frequently be seen wearing his signature cap, strolling under the trees, stopping to chat with students and colleagues, always having something interesting and humorous to say.