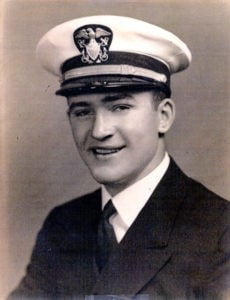 Dr. Harold Dean Wallace was born June 8, 1922 and passed away on August 13, 2019 at 4:30 a.m. He was one of eight children born to Howard H. Wallace and Edith M. Wallace. The family lived on a general livestock and grain farm in northern Illinois near the town of Walnut. Harold attended Walnut Community High School where he was active in all sports. He captained the
football and basketball teams his senior year. He was involved in F.F.A. and 4-H pig projects and showed animals at county and state fairs. He loved to judge livestock and in 1939, while participating in the Illinois State F.F.A. judging contest at the University of Illinois, he placed first in a field of over 1100 students. This was followed by the national 4-H livestock judging contest at the International Livestock show in Chicago. His team placed 5 th and he was 5 th individual. This interest in livestock judging continued throughout his academic career. Harold enrolled at the University of Illinois in 1940 where he studied Animal Science and General Agriculture. He was a member of Farm House fraternity. Shortly after Pearl Harbor he enlisted in the Naval Officers Reserve Training Program. His military training included 2 years of basic ROTC at the University of Illinois, a semester of Navy V-12 training at Purdue University and 17 weeks of midshipman training at Columbia University in New York City where he was commissioned an ensign in 1943. His active duty wartime assignment was with the Administrative Command Amphibious Forces – Pacific, Pearl Harbor. During this time he served as base security officer and officer in charge of the base motor pool. On May 21, 1944 he witnessed the little known “Second Pearl Harbor”. On that day 163 marines, sailors, soldiers, and coast guardsmen preparing for the invasion of Saipan, died and 396 were wounded. In spite of this terrible tragedy that included 9 large ships lost and several others damaged, the invasion armada reached Saipan as scheduled. Ensign Wallace was a participant in the aftermath and recovery activities of this event. At the war’s end Harold returned home for reassignment and during this break married his college sweetheart, Eleanor Ruth Siekmann of Beardstown, Illinois. Five daughters were born to this union which lasted 44 years until Eleanor’s untimely passing in 1989. Daughters Cheryl Ann Morris, JoEllen Preston, Janet Marie Rose, and Marcia Lynn DeDominico survive. Patricia Jean passed away in early childhood. After completing his naval service at Great Lakes naval training center in 1946, Harold reentered the University of Illinois and earned a masters’ degree in swine nutrition. He then went to Ithaca, New York where he completed study for a doctoral degree in Nutrition, Biochemistry and Veterinary Physiology at Cornell University. Dr. Wallace came to Gainesville in February of 1950 and joined the faculty of the Department of Animal Husbandry and Nutrition. For the first year he taught nutrition courses and conducted basic research in nutrition. He was then offered an opportunity to provide leadership for a program in swine teaching, research and extension. For 26 years Dr. Wallace taught nutrition courses and helped train many graduate students from all parts of the world. He and his colleagues published more than 300 scientific papers and popular articles dealing with a wide range of pork production topics. He received several awards and recognitions for his work, among them the American Feed Manufacturers award in 1962 forresearch in swine nutrition. In 1976 Dr. Wallace was named Chairman of the Animal Science Department, a position he held until his retirement in 1984. On Valentine’s Day 1992, Dr. Wallace married Elinor Aagasen (Glaze), a high school classmate. Elinor, like Dr. Wallace loved sports, especially golf, and believe it or not she was a pig farmer for 30 years. She was also a banker. For 16 years after their marriage they commuted between their farm near Tampico, Illinois and Gainesville, spending 3 months in Illinois and 9 months in Gainesville each year. Dr. Wallace was an avid golfer and participated in this sport for over 75 years. At age 71 he shot his age for the first time and subsequently accomplished this 1056 times. He joined the Gainesville Country Club in 1961. He has had the privilege of playing in many of the states of this great nation and in several foreign countries. A second hobby was gardening and working in his greenhouse with orchids and other flowering plants. Dr. Wallace was baptized and became a member of First Presbyterian Church of Gainesville in 1954. He served as usher for many years, was a Deacon with Preacher Gordon, an elder and a longtime member and president of the John Hoover Sunday School class. More recently he was an active participant in the Gordon-Hoover Bible class and served for many years on the church personnel committee. His faith in God and loyalty to this church family have been high priorities in his life. He was preceded in death by his parents, Howard and Edith Wallace; siblings Edna Allen, Loyal Wallace, Franklin Wallace, Marvin Wallace, Iletta Kitterman, daughter Patricia Jean Wallace, and wife Eleanor Ruth Wallace. He is survived by wife Gladys Elinor Wallace, siblings Lois Fordham and Neale Wallace, daughters Cheryl Ann Morris (Charles), JoEllen Preston (Steve), Janet Marie Rose (Wayne), Marcia Lynn DeDominico (Tony), grandchildren: Cynthia Cardascia, Catherine Clark, J. Blair Preston, Kimberlee Eileen Taylor, Kimberly Ann Altman, Carl Dean Rose, Christina Marie Rose, Anthony DeDominico, Austin DeDominico, great-grandchildren: Bradley Hill, Zachary Hill, Jackson Clark, Madison Clark, Blair-Stephen Preston, Tyler Emerson, Brennan Emerson, Zachery Emerson, Cole Kragenbrink, Zane Kragenbrink, C. Owen Rose, Ruthann Rose, Christopher Keel, Michael Kleinatland, and multiple extended family members. Visitation will be at Forest Meadows Funeral Home, Monday August 19, 2019 from 5:00 pm – 7:00 pm. Memorial Service will be at First Presbyterian Church of Gainesville, Tuesday August 20, 2019 at 11:00 a.m. Reception to follow in Gordon Hall.