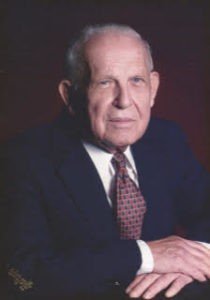 Dr. Michael Homa, age 94, passed away peacefully on December 25, 2019 at his home in Gainesville, Florida. He was born on January 21, 1925 to John and Anna Czerhoniak Homa in Jersey City, New Jersey. He graduated from high school in 1943 and proudly served his country as a 1 st Lieutenant in the Army Airforce during WWII. He was a navigator on a B-17 in the 97 th Bomb Group.
After the war, Michael used the G.I. Bill to earn a bachelor’s degree from Ohio Wesleyan University in Delaware, Ohio. He then attended medical school at New York University, did his internship at the University of Cincinnati, and completed his surgical residency at Georgetown University. For nearly 30 years, he practiced general surgery in northern Virginia, where he was beloved by his patients. After retirement, he and his wife moved from Springfield, Virginia to Gainesville, Florida in 1989. He was committed to community and professional service, including such roles as  dvisory board member for numerous organizations and medical examiner for the state of Virginia. He acted as medical advisor for research projects related to sudden infant death syndrome and artificial heart valves. He also trained many cohorts of surgical residents at Georgetown University. Michael was a longtime member of the Rotary Club, both in Virginia and Florida, where he actively contributed to fundraising efforts. Here in Gainesville, he was well known at the Rotary Club’s yearly Wild Game Feast as “Chef Mike.” His lifelong interests include gardening and fishing, in Florida as well as Maine, where he liked to spend his summers. He was a member of Holy Trinity Episcopal Church and also attended Trinity Methodist in Gainesville. Michael was preceded in death by his wife, Betty, of 43 years as well as by two brothers and two sisters. He was survived by two children, Jerelyn (Harry) and John (Pam), four grandchildren, and five great-grandchildren. In lieu of flowers, memorial donations may be made to the Rotary Foundation. Condolences may be left in Michael’s name in the online guestbook at The Gainesville Sun. Visitation will be at Forest Meadows Central Cemetery 4100 NW 39th Ave Gainesville, Fl 32606. Chapel in the Meadows from 10-11 am January 4, with 11 am Service. Funeral Services will be under the direction of Forest Meadows in Gainesville, 352-378-2528.