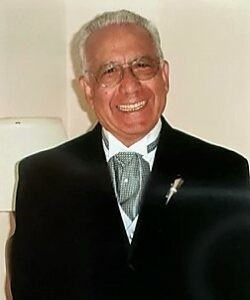 Mirza Adib Rabbani was born February 1, 1933 in Yazd, Iran to Mirza Mohammad and Sultan Rabbani. As the youngest of 5 children, he grew up in a Baha’i family and pursued his education in medicine in Tehran. He married Iran Tabassi Rabbani in 1965. They then moved to and lived in the city of Abadan, Iran, and nearby Minoo Island, where he practiced family medicine for 25 years. He was beloved by many people and patients in this rural community. Prior to the Iranian revolution of 1979, he and his family sacrificed everything to immigrate to the United States of America as he underwent persecution due to his religious belief in the Baha’i Faith. After moving to Orlando, FL he retired from practicing medicine and devoted his time and efforts to his family and children. He inspired his 3 children to follow in his footsteps and become physicians. He was a faithful and active  believer in the Baha’i Faith religion, promoting unity amongst all mankind and working towards universal fellowship and peace. In 1994, they moved to Gainesville, FL where he lived until his passing on July 6, 2022. He is survived by his wife Iran Tabassi Rabbani, his eldest daughter Dr. Mojdeh Rabbani, his son Dr. Omid Rabbani, his youngest daughter Dr. Marjan Rabbani, and his three grandsons, Nabil, Aiden, and Eman Rabbani.