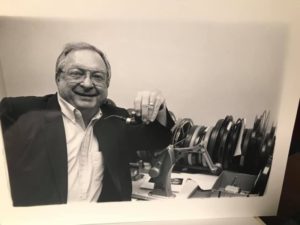 Ed was born in Dalton, Georgia to Edward and Helen Wells on August 4, 1925. They moved to Pensacola, Florida where he was raised. He was an active member of the Boy Scouts and earned his Eagle Scout badge. After graduating high school, he enlisted in the US Army where he served during WWII in the 34th Infantry Division.  He saw action in Europe and Africa. He was wounded during the Battle of the Bulge and received 2 Bronze Battle Stars, and a Purple Heart for his service. Following his time in the service, he graduated from the University of Florida with a Bachelor Degree in Architecture and returned 2 years later to earn a degree in Fine Arts.  He worked for the Boy Scouts of America and was active as a Boy Scout leader.  He worked for the Florida Department of Agricultural and Consumer Services, Division of Plant Industry. He was an instructor at the University of Florida College of Journalism, teaching film and cinematography for 29 years.  He retired from the University of Florida as a Professor Emeritus.  He was also an instructor of Photography through the continuing Education Classes offered by Santa Fe Community College. He was an accomplished artist in a variety of art media with general focus on oil and watercolor paints. He was active in the Gainesville Fine Arts Association, where he was president for 5 years. He was involved in Wesley United Methodist Church as a Sunday school teacher and a youth leader. He later became a member of Trinity United Methodist Church.  He was an accomplished photographer, and enjoyed taking wedding pictures, as well as teaching others about the art of photography. He loved camping and spending time outdoors.

Ed (Rippy) was a son, brother, father, grandfather, great-grandfather and a friend to many.  He is preceded in death by his wife, Doris Wells.  They were married 56 years at the time of her death in 2012.

In lieu of flowers, memorial donations may be made to Folds of Honor, and Wounded Warriors.