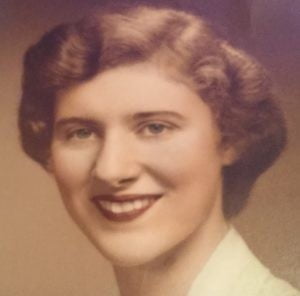 With great sadness we announce the passing of Elizabeth Lucia Riggio Diven. She passed peacefully at home, held in the hands of the family she loved so dearly.  Born June 6th, 1934, in Newton NJ, Died December 3rd, 2017 in Gainesville Florida literally surrounded by her children, grandchildren, and great grandchildren.  Betty was preceded in death by her parents Frances Van Dyke Reid Riggio & Chester J. Riggio, and her husband of 58 years, William Alvin Diven.

Growing up, her family lived in Freehold and North Plainfield NJ, spending much of her childhood on her grandparent Reid’s turkey farm in Manalapan NJ. There she and her sister played school with the turkeys, calling out mathematical equations and getting faithful responses from the fowl pupils.  She was an athlete, loved to climb trees, fish in her grandparents brook, play basketball, and softball, and was a cheerleader at Freehold High School.  She was an artist, she drew, painted, sewed, crafted, wrote stories, sang in church choirs, was in a bell choir, and was a musician who played the keyboard and violin.

Her career after marriage was homemaker and mother. She reared five children of whom she was very proud.  She was absolutely the best mom and grandmom in the world.  Some examples of the things she did are: wrote, directed, made costumes, set, and music for a neighborhood Christmas play, started and coached pop warner cheerleading squad, started girls softball league, made homemade costumes and clothing, held extravagant Halloween parties from the 60’s through 2016 for family and friends, organized Christmas caroling for her children and the neighbors and much more.

When her children were older she worked as a waitress in Port St Lucie, a secretary at Independent Life in Tampa, Shands Oral Surgery and Orthopedics in Gainesville until she was diagnosed with lung cancer with metastisis, and kidney cancer in 1992. She loved her life, she beat those cancers and a few more to live another 25 years fighting and laughing through it all.

She was known by many names; Elizabeth, Betty Lou, Betty, Mom, Gram, Grandmom, Memom, and Baba. She was a member of the Red Hat Society, had many friends, the best of whom were her sister Frances, and Annie Lyles.  In addition to her sister Frances Young, she is survived by her children: Jim Diven (Donna), Cindy Diven (JoAnne), Fran Diven-Whalen (Bill), Betty Jean Braun (George), Lori McGuire (Mike), Grandchildren: Jason, Jack, Jimmy, Julia, Owen, Kevin, Andrea, Laura, Lexi, Zach, Emma Jean, Kyle & Bryan, Great Grandchildren: Connor, Abby, Colton, Corey & Lydia, plus Nova on the way.  She is also survived by her sister-in-law Margaret, nieces and nephews: Tracy, Gary, Tim, Frances, Nancy, Mary Ellen, and Margie, whom she loved dearly, and who loved her.

Services will be held Friday December 15th 2017 at 10am, at Forest Meadows 725 NW 23rd Ave in Gainesville Florida, 32609, interment to follow at Forest Meadows 3700 SE Hawthorne Road.  In lieu of flowers please consider donations in her name to Leukemia and Lymphoma Society, or Nature Coast Hospice.