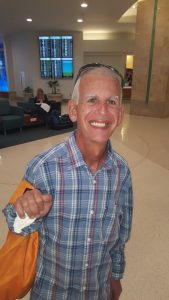 “Life is great. Enjoy it!” Eric Pomeranz, 55, of Miami, FL passed away peacefully with his family by his side on January 7, 2021. Eric was born in New York, but later his family moved to Miami,
where Eric would live for the next 40+ years.

Eric was born with special needs, before federal law afforded special people like Eric with protections and opportunities. His mother, though, knew no bounds when it came to advocating for her son. She ensured Eric would not be left out. He played drums in a rock band in middle school. He was the football team’s equipment manager at Sunset High, wearing the distinctive number zero. At graduation, applause erupted when Eric’s name was read. 800+ students and families stood in recognition. He simply walked with a smile through the cheers.

At 22, he moved into the Haven Center in Kendall, where he was well-known and loved. He gained vocational skills and a job at Wendy’s. Later, Eric sought and obtained a job at Pizza Hut,
where he worked for 20+ years. Gaining independence, he left the Haven Center for a group home. He later moved into his own apartment, where he lived for most of his adult years.

He was well known at Kendall Lakes Mall, perhaps his favorite place in Miami. He drank Café con Leche at the bakery and ate pizza at the pizza place he loved since high school.

He loved the Phins, Heat, and Canes, even after his brothers attended FSU and UF. He knew everything about sports and could recite stats on demand. He commiserated over the Phins on
Sundays with his dad.

He loved his brothers and sister fiercely, and their spouses, often visiting them in Gainesville, Atlanta, and New York, always flying independently. Not a Mother’s Day or Father’s Day passed
without a call from their brother or brother-in-law Eric, also a beloved Uncle Eric. The center of his family, his siblings’ friends were always his friends too.

He inspired the careers of his brothers adding to a legacy already established with his kindness and smile. As his youngest brother is a professor, Eric taught a class one day at UF, ending in a
standing ovation.

Anyone who knew him, loved him and will miss his love for sports, his love for rock and roll, and most importantly his love for people and life. The world and all who knew him are better
because of him. He couldn’t have achieved all he did without the love and support of the care givers and coaches throughout his life, especially those at Sunrise; for them, Eric’s family is
eternally grateful.

A virtual memorial service will be held January 23 rd at 1:00 pm on Zoom:
Meeting ID: 811 3038 2928
Passcode: 029545
Although not necessary, the family welcomes donations to Annandale Village
(https://annandale.org/), a residential community for adults with developmental disabilities, as
an expression of sympathy instead of flowers.