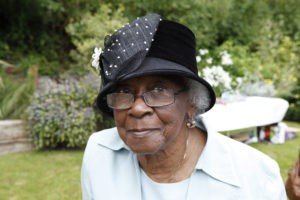 On Friday, the 3 rd of July, 2020, Evelyn Evadne McKetty (née Dennis) passed peacefully away, a month shy of her 99th birthday. Evelyn was born in Preston, Cuba, on August 6 th , 1921, to Louise and Daniel Dennis. When she was 9, the family (now including four younger sisters) moved to Jamaica – Louise’s and Daniel’s homeland. It was there, in Carisbrooke, St Elizabeth, that Evelyn grew up.

A keen and ambitious pupil, after completing her secondary education, Evelyn went on to study at Bethlehem Teacher Training College for Women in Malvern, St. Elizabeth, where she excelled.
In December 1945, teacher’s degree in hand, she married Vincent, also a teacher. Together, they had seven children. Evelyn’s professional ambitions were not at all dampened by the
responsibilities of a large family, however, and she worked for over twenty years as a primary school teacher. Evelyn, who loved learning and challenging herself, went on to earn a Bachelor’s
degree in Early Childhood Education from the University of the West Indies in 1970. From 1972 through 1977 she held the position of Lecturer in Psychology and Principles of Teaching in
the Teacher Education Department at Excelsior Community College in Kingston. When Evelyn, along with husband Vincent, moved in 1978 to Gainesville, Florida, she took on her final post,
Director of St. Augustine Day Care. Never mind the qualifications she had, ever the keen learner, Evelyn enrolled at the University of Florida and was awarded her Master’s in Education in 1983.

Evelyn Evadne adored music – both listening to it and producing it herself. Whether it was sight-reading sheet music at the piano, plucking guitar strings or producing the torturous shrill
squeals on her violin that every beginner does, making music made her day. The instrument she was most proud of, though, and the one she engaged most often, was her voice. This instrument
she did not play only at home, where she would often burst into song; she was a proud member of her church choir—in Jamaica, and later in Gainesville—and always took delight in
contributing with a solo.

Another love that characterized Evelyn was her love of gardening. Her husband, Vincent, was the pragmatist – most interested in plants that produced food. Evelyn was the aesthetic gardener. Her attention focused on the beauty of her roses, her anthuriums, her orchids, her camellias, her African violets. For her, flower gardens were a piece of heaven on earth.

Evelyn’s love of learning manifested itself not only in formal study but in the delight she took in travel going off to someplace new and experiencing something different. She was an avid
traveler and was always up for an adventure. Her trips abroad included visits to England, France, Germany and Switzerland.

Evelyn’s Christian faith was the defining part of her life. From childhood into old age she was an active member of different church communities. For over 40 years she and Vincent worshiped
at Holy Trinity Episcopal Church, where she shared her musical gifts as a dedicated member of the choir, and was active in several other ministries. Even after she was no longer able to attend
regularly, Evelyn cherished visits by the close friends she had made over the years as a member of Holy Trinity. Be it due to faith or just her personality, Evelyn had a certain calmness about her
that all people she came in contact with benefited from. Her advice was always solicited and she gave it without being overbearing.

Evelyn was preceded in death by her husband, Vincent, and all of her siblings. She is survived by her seven children (Dennis, Joye, Marlene, Carlyle, Everett, Carol and Noel), nine grandchildren (Marlon, Cinque, Camara, McKenna-Louise, Liam, Nicola, Ariadne, Matthew and Marissa), four great-grandchildren (Lewis, Carla, Francis and Cameron), daughters-in-law, granddaughters-in- law and sons-in-law as well as many nieces and nephews.

Evelyn lived life fully and we are assured that she is now resting in peace.