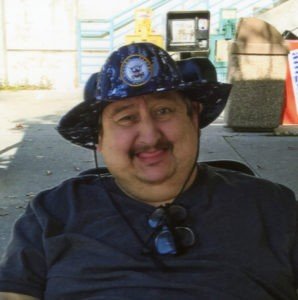 Fernando Fernandez, age 58, passed on to his eternal reward on February 21, 2018 at Malcolm Randall Veterans Affairs Medical Center after a brave fight with multiple sclerosis for the past thirty one years. His family and Veronica Shepard, one of his, were at his bedside when he passed away peacefully.

Fernando was born in San Antonio, Texas on November 3, 1959 to Santos and Adelina Fernandez.

He graduated from John Jay High School in 1978. He joined the US

Navy in April 1979 and was honorably discharged in September 1987 with the rank of E-5 CPO second class. He served his entire Navy career on the USS Bonefish. He lived most of his life in San Antonio, TX until he moved to Gainesville, FL in September 2015 to be closer to his sister Alma Fernandez-Smith and her family.

Fernando was preceded in death by his parents and infant sister, Rita, who passed away in 1952. He leaves behind his favorite sister Alma (Steve) and their children Andrew and Daniella Smith. Fernando is also survived by his older brother Francisco E. (Maria ) and their son Francisco E. Fernandez Jr., of Daly City, CA and their daughters Jennifer Hernandez and Stephanie -Ann Guiling of Sacramento, CA, and Cynthia Aripino of Pacifica, CA and their spouses and children. Finally, Fernando leaves behind his aunt Beatrice de la Garza, his uncle Octaviano Fernandez ( Josephina) of Monterrey, Mexico and aunt Rosa Elia Gutierrez ( Gerardo ) of Edinburg, TX.

Fernando was very active with the MS Society in San Antonio, TX and, despite his disability, he maintained the Big Bend subdivision lawn until his health no longer permitted him to do so. He was a kind-hearted man who looked out for his neighbors and befriended other MS patients. Everyone always noted his sense of humor and positive outlook on life. He was a loving son, brother, uncle and brother-in-law. He enjoyed drinking his Coca-Cola and always loved going out to eat at Red Lobster.

Mr. Fernandez and his family truly appreciated the medical care he received from the Audie Murphy VA in San Antonio, TX, the Malcolm Randall VA in Gainesville, FL, the special transportation he received from VA Travel and MV Transportation in Gainesville. They also appreciated the care he received from Signature Health Care, Brookdale, Nurse on Call, Health South Ocala, and especially the last year and a half from North Florida Rehabilitation and Specialty Care and Mr. Tim Eastman PA . Fernando always considered North Florida Rehab his home. The family wishes to thank Gator Custom Mobility, for the numerous times they repaired his motorized wheelchair.

Mr. Fernandez’s family would like to thank Hospice of the Nature Coast and the eucharistic ministers of Holy Faith Catholic Church for sharing Christ’s great gift with Fernando.

A Mass will be held on March 10. 2018 at 11:00am at Queen of Peace Catholic Church Chapel, 10900 SW 24th Ave Gainesville, FL. with Rev. Jeffrey McGowan officiating. Donations may be made to Fisher House, the MS Society, or Hospice of the Nature Coast.

Funeral arrangements are under the care of Forest Meadows Funeral Home, Gainesville, FL.