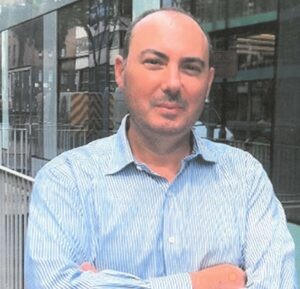 George Loukas Arvanitis (1967-2022), renown international architect and urban designer, passed away peacefully in UF Health and Shand’s surrounded by family in Gainesville, Florida on November 1st. He was born in Ottawa, Ontario, Canada on October 5, 1967, to Loukas and Massina Arvanitis of Gainesville. George grew up between Canada and Greece before his family eventually settled down in Gainesville, Florida in where his father was a distinguished professor of forestry at the University of Florida.

George showed artistic talent at the early age of four by sketching and drawing on his own and demonstrated a special fascination with building designs. Combined with daring and adventurous streak, he once left school while in Greece to examine the famous circular White Tower in Thessaloniki, causing his parents a mix of anxiety and amusement when he was returned to them by the police in a Jeep after they found a small child alone in front of the tower. Following graduation from Gainesville Buchholz High School, his fascination with design was honed at the University of Florida’s college of architecture where he received a Bachelor of Architecture degree in 1989.

He shortly thereafter left UF for Harvard Graduate School of Design and was awarded a Master of Architecture and a Master of Architecture and Urban Design degree in 1993. He subsequently worked for a number of international architectural firms especially based in the UK on a wide range of projects, earning himself an international reputation for bold designs especially in Europe, the Middle East and in the United States. He was especially well known for delivering large and complex developments, the most famous of which was the Eleftherios Venizelos National Airport in Athens, Greece, now a landmark gateway to the historic country of his heritage. Deeply aware of his heritage, George had lovingly designed two spectacular mountain retreats on family land near the “xorio” that would delight his and his brother’s families.

His adventurous-and courageous – streak was apparent at the end, continuing his design work while in hospital. At the time of his death, he was Director of Master Planning and Urban Design and based in Dubai where he resided with his family, but made frequent visits to Gainesville, Florida. He returned to Gainesville to be with his loved ones at the end feeling that it was his true home. He is predeceased by his father, Loukas, and is survived by his mother, Massina, his brother Basilius Arvanitis, and sister-in-law, Donna of Jacksonville, Florida as well as his wife Georgia and two children, Lucas and Electra of Dubai.