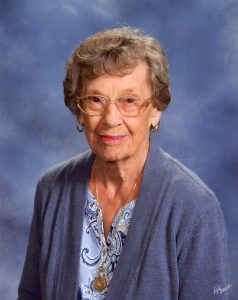 Gladys Elinor Wallace was born in Normandy, Illinois, on April 15, 1922 and passed away on October 8, 2020.  She has always been known as Elinor to family and friends.  She moved to Walnut, Illinois in 1926 and joined the First Christian Church when she was eight years old.  She graduated from Walnut Community High School in 1940.  Elinor loved music, played the saxophone in the high school band, and sang in the school chorus and in a special quartet. She was a cheerleader and served as class president in 1939.  During World War II, Elinor worked at the Dixon, Illinois ordinance plant as a switchboard operator.  Elinor married Edward Aagesen in 1948.  They lived on a farm near Tampico, Illinois where they raised pigs and grew hybrid seed corn and soybeans.  Elinor also worked in Walnut on the switchboard, and worked in a bank for a total of thirty years.  Her husband Edward passed away in 1987.

On Valentine’s Day, 1992, Elinor married high school classmate Dr. Harold D. Wallace, a retired professor at the University of Florida in Gainesville.  Elinor had no children from her first marriage, but when she married Harold she became step-mother to four daughters.  She has been a caring, loving, and special mother to these daughters and their families, and has received much love in return.

Services to be determined at a future date.  In lieu of flowers, donations may be made in her name to First Presbyterian Church of Gainesville.