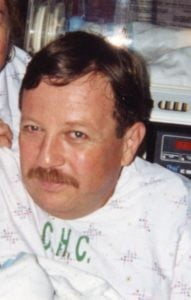 Gordon lived in Gainesville from 1974 to 1978 then returned in 1983 until the present. Gordon was born April 11, 1949 in Newark, NJ, to John Thornton Walker and Annette Frances Zuckerman.

He was raised in Pompton Plains, NJ. He graduated from Pequannock Township High School and subsequently moved to Ormond Beach, FL. He graduated from Stetson University in Deland, FL with a degree in Education. He continued his education at Santa Fe College where he earned a degree in Respiratory Therapy. He then worked at Shands hospital until 2004. His passion was working with families of children with Cystic Fibrosis. He befriended many of his patients and extended his personal phone number to them if they needed him.

He was an avid collector, and Gator memorabilia was at the top of his list. He loved his Gators and constant furry Pomeranian companions, Max Jr. and Sandy Paws.

He was proud to be an American and loved his country which was evident in his display of American flags.

Funeral Services will be at 12:30 PM Saturday, August 20, 2016 at Forest Meadows Funeral Home, 725 NW 23rd Avenue, Gainesville with visitation beginning at 11:00.  Flowers are welcome or contributions may be made in his memory to Cystic Fibrosis.  Casual clothing is requested and Gordon would approve of Gator attire!  A reception will be held at Napolitano’s at 2:30 after the service.  Please feel free to come to this even if you can’t attend the service.

Arrangements are in the care of Forest Meadows Funeral Home (352) 378-2528. An online guestbook is at www.forestmeadowsfh.com.