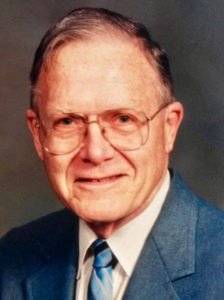 Gordon Robert Renshaw (Bud) passed away peacefully on January 3, 2018 in Gainesville, Florida. Gordon was born in Camden, New Jersey on August 13, 1923.  From 1929 to 1941 he grew up in Bedford, Pennsylvania. At the age of 17, in 1941, he enlisted in the US Marine Corp, serving 20 years until 1961; seeing war time duty in World War II in the south pacific as well as the Korean War in 1951.  He married Pauline Elizabeth Robinson in 1948, their first meeting being on the beach in California.  They would have celebrated their 70th wedding anniversary in 2018. Gordon brought his family to Gainesville in 1961 with employment at the University of Florida as a Nuclear Technician, retiring in 1987.

Gordon was known for his quiet selfless service. He worked in many volunteer positions including Boy Scouting in the 60s and 70s, Founding member of the Faith United Methodist Church, Gainesville Friends of the Library, Gainesville Police Department, Neighborhood Community Committee, and Gainesville High School Band Booster.  He loved helping with diverse projects such as building model rockets and airplanes with his family, building kayaks and a sail boat, rebuilding lake docks, painting houses, concrete artwork, and many more. He was an excellent cook, producing many holiday meals for his family to enjoy including his grandchildren and great grandchildren.

Gordon was also an accomplished artist. He could work in many mediums including oils, acrylics, fabrics, resin, etc.  He produced many beautiful paintings, sculptures, and yard art.

A memorial viewing will be held on Thursday, January 11, 2018, at 10:30am followed immediately by a memorial service at 11:00am, Forest Meadows Memorial Park Central “Chapel in the Meadows”, 4100 NW 39th Ave, Gainesville, FL 32606. Arrangements are under the care of Forest Meadows Funeral Home www.forestmeadowsfh.com