Harriet Elizabeth Brush O’Neal was born in Cedar Key, Florida 11-5-1925. She grew up in Cedar Key, FL and Tampa, FL. Her parents were Annie Wallace Brush and James Brush, who preceded her in death.  She was the youngest of 5 siblings, Daniel (DW), Theresa (Sissy), Wallace and Maurice, all who preceded Harriet in death. She grew up playing and spending her childhood with her nephew James and niece Joyce, whom she adored. She also had great times growing up with her dearest friend, Ellen Rae Price. Joyce and Ellen Rae would later be her bridesmaids.

In 1943, Harriet met Ellis Hugh O’Neal from Indiana, at a military USO dance in FL. He became the love of her long life. They were married in Tampa Nov 25, 1945 and were together 70 years before he died in April 2016. The couple moved from Florida to Illinois to New York, and eventually settled in Miami. They had 3 children Daniel, Kathy and Robin; 4 grandchildren, Jennifer, Jonathan, Patrick and Emily and 2 great grandchildren, Oliver & Owen. Harriet was active in Coral Gables United Methodist Church, as well as FP&L ladies auxilliary groups. She also enjoyed traveling, especially to Ellis’s WWII Crew Reunions for many years, and to the couple’s vacation home in the Smoky Mountains of North Carolina. Getting together with family and friends was her greatest joy.

Harriet was a homemaker, skilled seamstress & gifted decorator. She was talented in sewing, crafting, quilting and she even designed two of the homes where she and her husband lived.

Harriet and Ellis moved to Jupiter, FL and later to Oak Hammock in Gainesville, FL where she spent the rest of her life. She had wonderful friends and caretakers at Oak Hammock. Even though Harriet lived in different parts of the country throughout her life, she always considered herself a Southern Florida Girl. She is survived by her children, grandchildren, nieces and nephews, 3 sisters-in-law, and 1 brother-in-law.

Arrangements are being handled by Forest Meadows Funeral Home. A private service is to be planned by the family. 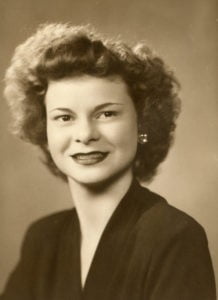