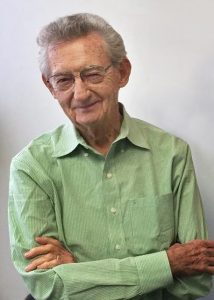 COLLINS, HARVEY ARNOLD, 94 Bradenton, FL – Harvey Arnold Collins, Jr., 94 of Bradenton, Florida, went to be with the Lord on Monday, September 6, 2021, after a short illness. Harvey was born on August 22, 1927, to Harvey Arnold Collins, Sr., and Pansy (Bugg) Collins and grew up in High Springs, Florida where he graduated from High Springs High School. He then served with the United States Army in the Army of Occupation in Seoul, South Korea and attained the rank of Master Sergeant in the Signal Corp. Following his return to Florida, he attended the University of Florida in Gainesville, where he graduated with a BA in Fine Arts and a Master of Fine Arts.  While at the University, Harvey attended Gainesville First Church of the Nazarene, where he met and fell in love with Thelma Louise Haufler, who became his wife in 1951. Their first daughter, Cheryl Ann (Collins) Graves was born in 1952. They then moved to Bourbonnais, IL, where Harvey taught Fine Arts at Olivet Nazarene University, and their second daughter Patty Lynn (Collins) Mills was born in 1954. Harvey and Thelma then moved to Clearwater, FL where he became a teacher at Oak Grove Junior  High School, and in 1962 they welcomed their son Marc Alan Collins to the family. In 1970, Harvey was asked to return to Olivet as Chairman of the Fine Arts Department. His murals and paintings can be found throughout the campus. For several years, Harvey toured students and faculty through the major capitals of Europe where he lectured in the great museums. He was given an honorary Doctorate by the University in 1984 and served as a much loved and respected professor until his retirement in 1990. Harvey and Thelma enjoyed their retirement in Gainesville, until they moved to Bradenton, FL in 2012.  Thelma preceded Harvey in death in 2015. Harvey is survived by daughter Cheryl Graves (Harold) of Spring Hill, KS, daughter Patty Mills (Virgil) of Bradenton, FL, and son Marc Collins of Los Angeles, CA, six grandchildren and 12 great- grandchildren, and his sister Sonja Pride of Florida. Funeral services for Harvey will be held on Saturday, September 18, 2021, with a viewing at 10:00 a.m. and service at 11:00 a.m. in the Forest Meadows Memorial Park Central’s “Chapel in the Meadows”, 4100 NW 39th Avenue, Gainesville, FL with internment to immediately follow the service. Arrangements are under the care of Forest Meadows Funeral Homes and Cemeteries, 725 NW 23rd Ave., Gainesville, FL 32609 (352) 378-2528. Please sign Harvey’s online guestbook at www.forestmeadowsfh.com.