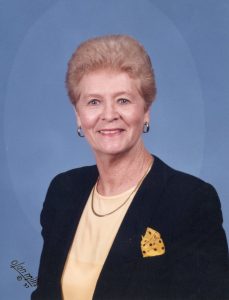 Helen Scott Tenney passed away peacefully at Community Hospice in Baptist Medical Center, Jacksonville, on Sunday, February 21, 2021. She was 85.

Helen was born on August 22, 1935 to William Clinton and Julia Pope Scott. She grew up in Williamson, West Virginia where she was named Little Miss Williamson for performing to “Five foot two eyes of Blue”. She graduated from Williamson High School and went to Morris Harvey College where she met the love of her life. She married Tom Tenney on September 9, 1955 and they celebrated 60 years of marriage before his passing.

Helen had a career in mortgage lending and later became assistant to the editor of the Palatka Daily News. When her husband felt the calling to the ministry as his second career, she passionately served God by his side in several churches in northeast Florida. She enjoyed singing in the community chorus, participating in numerous church events, and playing with her great-grandchildren.

Due to COVID 19, private family services will be held at 11:00 am on Saturday, February 27, 2021 at the Chapel of the Meadows, Gainesville, with Reverends Randy Strickland and Mike Oliver officiating. Interment will immediately follow at Forest Meadows Cemetery, Gainesville.

Forest Meadows Funeral Home is in charge of arrangements and flowers may be sent to them at 725 NW 23rd Avenue, Gainesville, FL 32609.