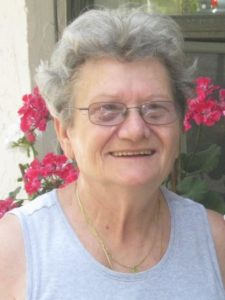 Isabella Virginia Isastia Henriquez died Friday, the 7th of April, in her room in the house she shared with her family. She was surrounded by their love until the end. Born on August 22, 1939 in Tripoli, Libya while it was an Italian colony, she married her husband in 1968 and they moved to Italy. After having two boys, she moved with her family to the United States in 1980. She resided in Orlando, Florida for one year then West Palm Beach until 1999, when she moved to Gainesville. Isabella worked many years at a nursing home in Lake Worth, Fl, starting as a housekeeper and progressing up to become the bookkeeper for the facility. Upon her husband, Mario, becoming incapacitated by a stroke in 1993, Isabella single-handedly supported her family by taking second jobs, first at Winn Dixie and then at Publix. By working 70 hours a week, she was able to raise her two sons, pay off a mortgage, and pay for all of her husband’s medical bills. Through all this, she never asked for recognition or treated herself to any of life’s luxuries. She only did it out of love. Isabella enjoyed cooking, dancing, playing cards, listening to opera and the Glenn Miller Band, knitting, gardening, flowers, and all beautiful things. Most of all she loved her “Belli di Nonna”–her grandchildren. Isabella was Mamma to William Isastia of Garner, NC, and Massimo Isastia of Gainesville, Fl. She had two daughters she gained through her sons’ marriages to Cristina Isastia and Teresa Isastia. She was Nonna to seven–Nina, Daniela, Mario, William, Juliana, Leo, and Carlo. They all survive her and will miss her. She is also survived by her sisters and brother: Virginia Draghicchio of Green Bay, WI; Anna Rossi, and Nino De Nobili both of Ciampino, Italy. All look forward to seeing her again. Forest Meadows Funeral Home will hold a viewing for Isabella on Friday, April 21st between 7:30 PM and 9:00 PM. Her funeral will be held at Holy Faith Catholic Church on Saturday, April 22nd at 9 AM. She will be laid to rest beside her beloved husband, Mario, at Forest Meadows Memorial Park Central Cemetery on 39th Ave.

Arrangements are under the care of Forest Meadows Funeral Home, Gainesville, Florida.