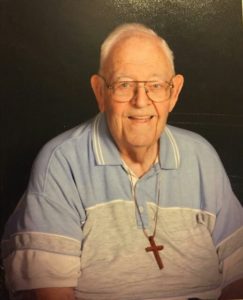 Jack Lewis Rice, aged 85, died peacefully in his home Friday, November 3, 2017. A memorial Eucharist, celebrated by Fathers Tony Powell and Jeffrey Mackey will be held Saturday, November 18, 2017 at Trinity Episcopal Church, Melrose Florida, where he was a longtime member.

Jack was born September 9, 1932, in Holly Hill, Florida, to Marian Martin Rice and Ola Cupp Rice. He spent his youth in Ormond Beach and graduated from Mainland High School in 1951. He served four years in the Air Force, where he was a skilled airplane mechanic, and was honorably discharged in September of 1955, with the rank of Staff Sergeant.

He was especially noted for his extraordinary bass voice all during high school, and was a member of the Air Force Singing Sergeants while stationed in Seattle, Washington. After his service, he attended Florida State University where he majored in sacred music. There he met Margaret Yeats, his future wife. He and she enjoyed many hours singing duets throughout his life.

Jack and Margaret were married January 31, 1959, and both enjoyed 58 years as man and wife. Soon, their family was joined by their daughters, Katherine Anne (Garcia), Marian Elizabeth (Paul), and Jennifer Elena (Lowe).

Jack was a salesman and spent his years before retirement as manager for Mini Maxi Warehouse storage facility in Gainesville, Florida. He was very active in Trinity Episcopal Church as a vestry member, Sunday school teacher, and faithful choir member. He participated yearly in Thanksgiving in the Park which he was instrumental in developing. He was also very active in the Lake Area Singers, which for many years produced numerous Madrigal Dinner programs at Christmastime, as well as many Gilbert and Sullivan operettas. He had major roles in H.M.S. Pinafore, Mikado, among others.

Besides his precious daughters Katherine, Marian, and Jennifer, Jack is survived by his six beloved grandchildren: Morgan and Sarah Garcia, Joshua and Lillian Paul, and Elena and Jacob Lowe. Jack loved to watch his grandchildren grow and mature, and was like a second father to them. He felt fortunate that the family had remained close to him in the Melrose and Keystone Heights, Florida area.

In lieu of flowers, the family requests that donations be made to Lake Area Ministries or the priest’s discretionary fund of Trinity Episcopal Church in Melrose, Florida. Arrangements are under the care of Forest Meadows Funeral Home, Gainesville, FL.