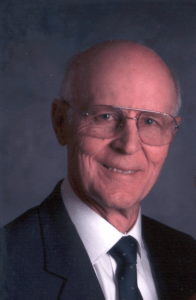 Jack Wayne Martin died at age 93. He was born in Fort Lauderdale, Florida on Flag Day, 1928 to G. Harold Martin and Margery (Young) Martin. He led a blessed, privileged and fruitful life with a multitude of opportunities.

For high school he attended Culver Military Academy in Indiana on a partial music scholarship where he became Captain of the Band and lettered in three sports, graduating in 1946. After attending the University of Florida on a partial football scholarship and joining Phi Delta Theta Fraternity, he received his appointment to West Point. There he played running back in 48-50 with a record of 27-1-1 under Coaches “Red” Blaik and Vince Lombardi. This culminated in playing in the North-South Shrine Game in the Orange Bowl Stadium in ’50. He graduated in the top 10% overall with a BS degree and was commissioned Second Lieutenant in the Corps of Engineers in 1951, serving for 24 years.

Education continued with a Masters in Civil Engineering from MIT, the Advanced Engineer Course at Fort Belvoir VA, the Marine Command and Staff College in Quantico, VA, and a Masters in Education from the University of Florida. He was then hired by the School of Building Construction in ’78, obtained his General Contractor license in ’82, was a National Director of Sigma Lambda Chi Construction Honorary Society, was the Architecture College’s Teacher of the Year in ’83, and retired Emeritus in ’90. Then in 2021 he was inducted into UF’s Rinker Construction Hall of Fame.

His overseas assignments included a three-year troop assignment in Germany, one year on two construction sites in Greenland, and one year in Vietnam where he commanded an Engineer Construction Battalion.

U.S. assignments included teaching ROTC at Auburn, AL and three staff assignments involving General War planning, including the Joint Strategic Target Planning Staff at Offutt AFB, NE. While stationed in Hawaii he was a member of the Nuclear Surety inspection team for the Pacific Theater. He was later promoted to Colonel, served as III Corps Engineer at Ft. Hood, TX, and was Chief of an Army Nuclear Response Team. After another staff assignment at The Engineer Center at Fort Belvoir, VA, he retired in 1975. Several decorations included the Legion of Merit and the Bronze Star, Meritorious, Air, Joint Service and Vietnam Service medals.

Immediately after West Point he trained, unsuccessfully, with the U.S. Modern Pentathlon Team for the ’52 Olympics in Helsinki. However, he was asked to be Coach/Manager for the 1953 World Championships near Santiago, Chile, and became an official scout. He also lettered in diving at West Point and represented the U. S. at the International Military Swimming and Diving Championships in Cairo in 1953. His athletic awards included Culver’s Inaugural and the Greater Fort Lauderdale’s Sports Halls of Fame.

He met and married Evelyn Rolfs, an Iowa-raised school teacher, in Germany. He credited her as the stabilizing force while sharing the joys and challenges of living in 14 different locations including Germany (John), Alabama (Richard and David), Virginia (Scott) and Nebraska (Jeffrey). Throughout all the years she remained a very committed and loving person.

After returning to Gainesville in ’75 he enjoyed multiple Gator sports, was a track official for over 20 years, taught age-group diving for the city, and supported UF football and women’s basketball programs.

He was very involved in First Lutheran Church committees for over 40 years and promoted Christian Heritage Week for several years by city proclamation. Also as ex-teachers, he and Evelyn enjoyed reading to young children in several local programs.

Both enjoyed traveling from Alaska to Brazil, from Turkey to New Zealand, and to Cuba. His bucket list included taking Evelyn to places he visited before they were married, climbing the Great Pyramid and surfing in Hawaii. Mission accomplished.

His way of sharing was through various programs for the underprivileged including community social services, elementary education, the homeless and veterans. Also education, music and athletic scholarships and international missions.

He and Evelyn moved to Oak Hammock in 2004 and thoroughly enjoyed their remaining years there.

He was predeceased by his wife of 61 years and is survived by their sons John (Susan), Richard (Cathie), David (Mary), Scott (Caroline) and Jeffrey (Maren). They had three grandchildren (Karl, Anna and Isaac), three step-grandchildren David, Tiffany and Alexandria) and five step-great grandchildren (Kyle, William, Sarah, Miles and Berkley). He is also survived by a brother James (Fort Lauderdale) and a sister Mary Hayes (Orlando , FL). He is remembered as a person of deep Christian faith, believed in honesty, moral integrity, hard work, fair play and total dedication to his country.

A memorial service will be held at First Lutheran Church on March 26th. The viewing will start at 10 am with the service following at 11 am. Burial will be later at Memorial Park in Ft. Lauderdale.

Expressions of sympathy may be made as donations in Evelyn’s name to First Lutheran Church of Gainesville, FL
32603 for the Child Development Center.