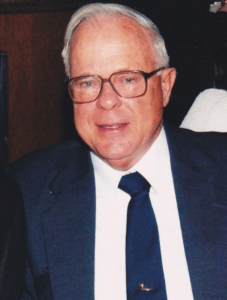 Jim earned his B.S. degree at the University of Massachusetts in Wildlife Management and went on to earn an M.S. and a PhD. in fishery/research/Statistics at Iowa State College. He was employed by the Bureau of Commercial Fisheries, the Fish and Wildlife Services and other government agencies in a variety of fishery research positions and received many honors and awards during his 35-year career. Jim retired as a Senior Scientist.

Jim was an avid outdoorsman with a passion for fishing and he instilled a love of nature and a respect for the environment in his children through countless family trips involving camping, hiking, canoeing, fishing, and photography. He was also actively involved with the Boy Scouts, Square Dancing and RV’ing.

Jim is preceded in death by his parents Alwyn and Ethel, his sister, Joan Russell, her husband, Bob and their four daughters and his sister-in-law, Peg McCann. Jim is survived by his wife of 64 years, Joanne, his son, Scott (Sandy), daughter, Brenda (Alex Dolinski) his daughter, Meredith, his twin brother, Jack and many beloved nieces, nephews, and friends.

Private services will be conducted at a later date. Arrangements under the care of Forest Meadows.