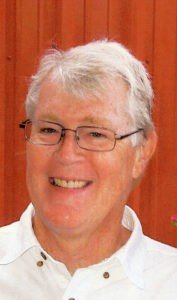 Born to B.L. and Maxine Graf Burton on December 9, 1950, Jim was destined, much to his never-ending surprise, to become a shining light for so many. As one would guess, the journey associated with his, in this case, aggressive disease – removal of his prostate, various hormone therapies, radiation, progressive oral medicines, nuclear therapy and multiple chemo treatments –  was a never-ending cycle of small successes followed by larger setbacks. Early on, he made the critical decision to treat his cancer as a job, to compartmentalize it as “work to be done”, which often meant 3-5 visits a week to physicians and other healthcare professionals, as well as managing devastating side effects.  Peripheral neuropathy took out all feeling in both legs to above his knees; over the past two years, he lost most of the feeling in his hands.

Over the years, there was not a single instance of “woe is me” or “why did God let this happen to me?”  Instead, he very deliberately chose to focus on laughter, kindness, and joy. He became very interested in every person who crossed his path, collecting tidbits of their lives and discussing them with caring and concern. He reveled in making people laugh and said how good it made him feel.  He was hugged so much at Gainesville Health and Fitness that his beloved personal trainer, Mark Williams, had to make special time to accommodate the affection.  At the acupuncturist office of his equally beloved Dr. Min Li, he entertained other patients and kept her laughing.  She taught him Chinese words and he taught her Italian.  His best friends took him regularly to the Wing House, for outings at Panama City Beach, and he ate out a million times, sometimes multiple times a week at Napolatano’s.

His twinkle, his laughter, his other-directedness made people want to be around him.  To watch this was magical.  His heart was filled with life and love.  An old acquaintance visited him at Haven Hospice to share with him the impact that it made on him to see him a few times over these past eight years.  He wanted to thank Jim and tell him that he only wished they had been closer, so he could have known him better.

He found joy and happiness in the simplest moments and would continually point them out. “Wasn’t that a great dinner?”  “Wasn’t that fun?” “Isn’t this a perfect moment – just sitting here watching tv, you, me, and Izzy?”  Every day was broken into a hundred blessings.  His philosophy was that anything that might be upsetting was “small stuff.”  The big stuff equaled the many little joys that he noticed, sprinkling over his daily life, one day at a time.

On May 3rd of this year, the one-year anniversary of the passing of his dear buddy and brother-in-law (Lee Weaver), Jim and Linda confronted the inevitable news that all treatments had been exhausted.  In February it was discovered that the cancer was also in his liver. The final chemo had to be called off, because it was not working.  Jim posted a message on Facebook to alert family and friends and let them know that he and Linda would continue to live their lives, as they had been doing.  And so it was, until June 15.

Jim graduated from Sydney Lanier Elementary, Howard Bishop Middle School, Gainesville High School, Santa Fe College, and the University of North Florida, with a Bachelor of Business Administration. (He would want you to know that he received four perfect attendance certificates from Howard Bishop and GHS) He served four years with the U.S. Air Force during the Vietnam War. He was a real estate appraiser and owned his own business for many years, Burton Appraisal Company, until he retired in 2015.

Jim’s final two+ weeks were divided between Haven Hospice and home care.  Words can hardly express the family’s love and appreciation for the staff of Haven Hospice, beginning with DeAnna Beverly.  Jim’s desire from the beginning was to be in his own home when it was time for him to lay down his body and they fully supported his wishes (thank you, especially, to Nurse Nancy for the support).  Another set of angels then appeared on the home front – Sheri Kline, ARNP; Yvette Dandy, Tacheal Bryant, and Alisha Clayton, CNAs; Ebony Wilson, LPN and Danielle from Hospice.  This extraordinary team made his seven days at home comfortable, pain-free, and light-filled.

Finally, we want to extend our appreciation to Coach Mike White for his loving kindness to Jim.

A celebration of Jim’s life will be held at the Chapel in the Meadows, Forest Meadows, Corner of 39th Avenue and 43rd Street, at 4:00 p.m. on Monday, June 26th.  It will be officiated by Joy Glanzer. Only if you wish, please consider a donation to Haven Hospice or Haile’s Angels in Jim’s name.

Arrangements are under the care of Forest Meadows Funeral Home 352-378-2528 www.forestmeadowsfh.com