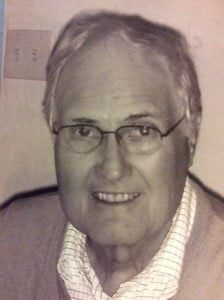 James Shepherd Mackintosh passed away after a long illness on Friday, April 20, 2018, in his home with his wife, Nancy, and daughter, Jami, by his side. ( . . .care of Jai and Hospice). Jim was born to James Daniel and Sarah G. Mackintosh on January 30, 1930, in Detroit, Michigan the oldest of six children.

He attended Detroit schools and as a true athlete participated in most sports. He joined the U. S. Air Force in 1948 where he served four years in Florida teaching unarmed combat, and was captain of the base basketball team.  He also completed an associate degree from Florida State University.  Upon discharge, he attended Wayne State University in Detroit and went to work for the J. L. Hudson department store.  Jim worked 15 years in the men’s clothing department, served on the consumer’s affairs, taught a merchandising class at the university and spent the next 15 years as the Director of Imports in charge of getting foreign merchandise into the country and to the floor for sale.  In his new capacity he was President of the World Trade Club, worked with people around the world, circumnavigated the globe making many friends along the way.

After retirement, he sold real estate in Grosse Pointe and played golf at every opportunity including trips to the Netherlands, Scotland and Hawaii. Jim and Nancy moved to Gainesville, Florida, in 2001 where they lived in a golf community near their daughter, and he continued his love for the sport.

He is survived by his wife of nearly 60 years, Nancy, his daughter, Jami Mackintosh, two sisters and many (special) nephews and nieces.

Jim’s service will be May 19, 2018 at 11 a.m. where he will be interred in the Patriot’s Garden of St. Madolyn’s Parrish in High Springs, Florida. Any donations you wish to make may go to the Veterans Hospital at 1605 Archer Road, Gainesville, FL 32608, in care of Dr.  Richard Schofield; Haven Hospice:  or to Jim’s special interest at St. Judes Hospital in Memphis, TN.