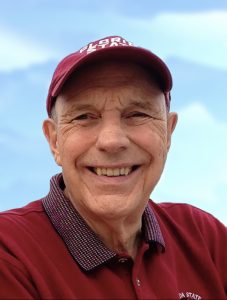 James William Coleman, age 81, of Gainesville died Feb. 14, 2022, at home following a lengthy battle with a rare form of leukemia. Mr. Coleman was born in Nashville, Tenn., and was the youngest child of William Edgar and Mazie Dean (Ramsey) Coleman. He graduated from Isaac Litton High School, and Belmont University with a bachelor’s degree in business administration. After graduating from Belmont, Mr. Coleman worked for the Sunday School Board of the Southern Baptist Convention for five years as a systems analyst and audio-visual sales
consultant.

In 1969, Mr. Coleman moved to Charlotte, N.C., and began his career in the insurance industry as service supervisor for the North and South Carolina branch office of Maryland Casualty Company. While in Charlotte, he met and married his loving and caring wife, Patsy. Mr. Coleman and his family moved to Florida in 1973, first to Tampa, where he worked for Poe & Associates, an insurance agency/broker, and in 1978 to Gainesville, where he worked for Florida Farm Bureau for more than 39 years before retiring in 2017 as Commercial Lines Underwriting Manager. Mr. Coleman attained the Charted Property and Casualty Underwriter (CPCU) designation along with several other certifications throughout his 45-year insurance career. He also served six years in the Army Reserve.

Mr. Coleman was a member of the Kiwanis Club of Gainesville and Northwest Baptist Church, where he faithfully served many years as a deacon and on various committees. He was an avid college sports fan and enjoyed following the Florida State Seminoles. He is survived by his loving and caring wife of 49 years, his two daughters of whom he was extremely proud, Karen Ramey (Paul) and Sharon Gilbert (Jody) of Gainesville; four grandchildren, Christopher Gilbert, Travis Gilbert, Kathryn Ramey Bogue (Tanner), and Tyler Ramey; niece Carolyn Hedgecock; nephew Paul Coleman and several cousins. He was preceded in death by his parents and brother, L.H. Coleman.

In lieu of flowers, the family requests donations be made to Sira Gainesville, 912 NW 13th St., Gainesville, FL 32601. The family also thanks VITAS Healthcare, including caregivers Martine and Adriana; and especially thanks friend Dr. Jimmy Johnson for his loving care and support.